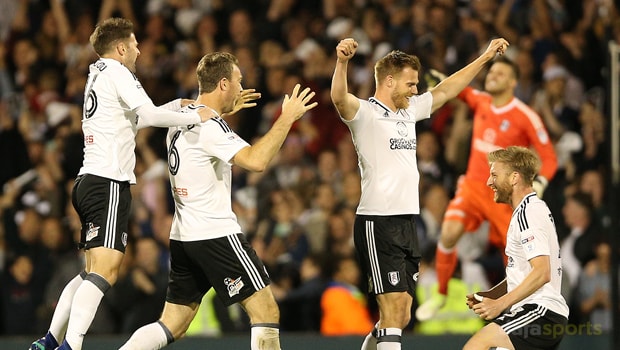 Kevin McDonald has urged Fulham to seize Premier League promotion when they take on Aston Villa in the Championship play-off final on Saturday.

The Cottagers are aiming to end their four-year exile from the top-flight by claiming the spoils at Wembley Stadium, while they are also hoping to put the disappointment of missing out on automatic promotion behind them.

Slavisa Jokanovic’s side finished third in the regular season standings, a place and five points ahead of Villa and Scotland international McDonald is convinced his side have the quality to get the job done on Saturday.

“We’ve got a big, big chance, with the players we’ve got in this team, we know we’ve got what it takes it’s a matter of how much we want it,” the 29-year-old was quoted as saying in the Birmingham Mail.

“It’s going to be a long 90, 120 minutes, penalties whatever. We need to make sure no matter what it takes that we make sure we do it.”

McDonald knows it could be a case of now or never for this Fulham team, with players such as teenage sensation Ryan Sessegnon and captain Tom Cairney likely to move on to pastures new if promotion is not achieved.

“Some of the players, if it doesn’t happen, will have the chance next year to play with a Premier League team, some of them won’t.

“But as a team we’ve got a chance now for every one of us to go up to the Premier League.”

Fulham are priced at 1.73 to be promoted come the end of Saturday’s action, while Aston Villa are available at 2.05 to secure a return to the top-flight for the first time since 2016.