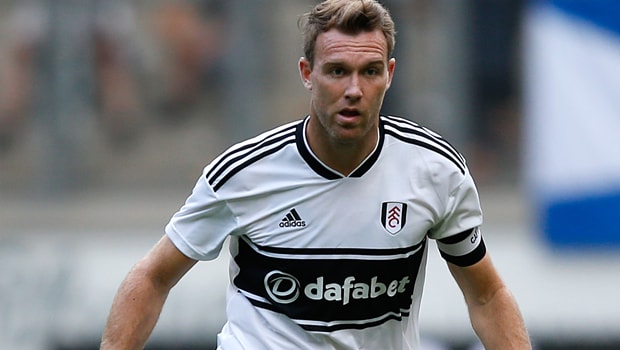 Kevin McDonald is delighted after putting pen-to-paper on a new two-year deal with Fulham.

McDonald has been one of the first names on the Fulham teamsheet since he signed from Wolverhampton Wanderers two years ago and is closing in on a century of appearances.

With the club all set for a Premier League return in the coming weeks, manager Slavisa Jokanovic has ensured the player is under lock and key at Craven Cottage.

McDonald’s leadership on the pitch was vital in 2017/18 as the Fulham won promotion from the Championship, while he also chipped in with some vital goals and was regarded as a model of consistency by teammates and supporters alike.

The midfielder has signed a contract which keeps him at Craven Cottage until the summer of 2020, with an option to extend by a further 12 months and he’s ecstatic.

“Obviously I’m delighted. I feel settled here, it’s a great place to play, it’s got everything needed for a Premier League club, and thankfully that’s what we are,” he said.

“Hopefully we can kick on this season, it’s been a great couple of years and – having extended my contract – I couldn’t be happier.”

The news came quickly after deals to bring goalkeeper Fabri from Besiktas and the announcement that German international Andre Schurrle had signed from Borussia Dortmund in what has turned out to be an excellent few days for the Cottagers.

Fulham are 2.38 to win their opening a Premier League game, a home London derby again Crystal Palace. The Eagles are 3.00 while the draw is 3.40.