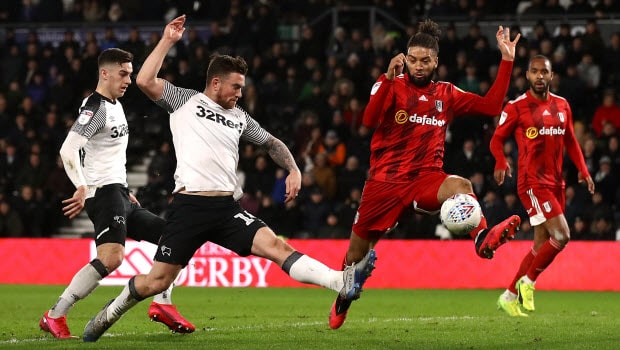 Fulham’s effort to catch up with the Championship top two teams Leeds and WBA has proven futile when it mattered the most.

While WBA continues to surf on top of the league with impeccable performances, Leeds United were struggling for a while, handing out an opening for Fulham to take their place in the automatic promotion seeding – but Fulham had their own issues to tackle and failed to take advantage of Leeds’ underperformance. Fulham is in the midst of one of their worse runs in the season, having gone three games without a win, all against teams without much hope for playoffs-challenge.

Disappointing to say the least, Fulham were held to a draw by Millwall, beaten by Barnsley and now also made to drop points against Derby. The 1-1 draw was very much like Fulham’s season so far – they kept possession, created chances but failed to convert and then the opponent got the opening and scored as they should. The same issues continue to haunt Fulham and once again It was only Alexandar Mitrovic, who managed to score.

As usual, Fulham controlled the game from the kick-off until the very end. The 13th placed Derby saw little of the possession to start with, but they utilized the little they had with dynamic offensive plays and many times caught Fulham out of possession with their counter-attacks. Overall Derby managed seven shots on goal against Fulham’s five, despite only having possession for 39%. Derby’s getaway goal was scored from a penalty by Wayne Rooney, after a hand ball by

Tim Ream. In addition to converting the spot kick, Rooney performed a brilliant 90 minutes despite not being the fastest player on the pitch – his skill and vision are still world class and he set-up his teammates for goal scoring positions time and time again. Marek Rodak in Fulham goal got the longer straw with a couple of excellent saves.

It didn’t look encouraging for Fulham, who seemed surprisingly toothless against Derby’s defense for the most of the match. Alexandar Mitrovic was once again needed to secure the draw for the visitors, as the Serbian scored a real poachers effort sneaking in a low cross by Aboubakar Kamara. The 22nd goal of the season was enough to secure a point, but Fulham needs to start winning again soon if they are to challenge Leeds and WBA on top and in order to keep the trio of Brentford, Nottingham and Preston at arm’s length – currently they are only a point behind.