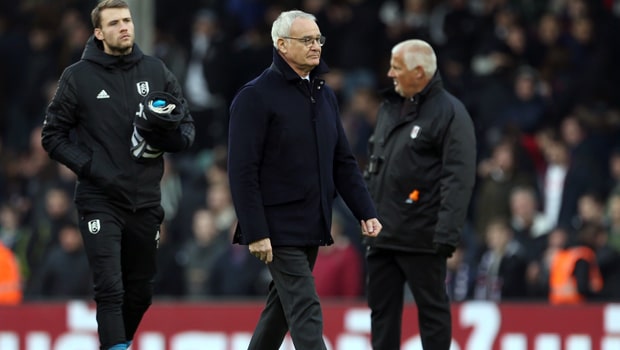 Claudio Ranieri was left frustrated after his Fulham side let Wolves back into their Boxing Day game although he insisted there are signs of improvements.

The game at Craven Cottage ended 1-1, with Ryan Sessegnon giving the home side the lead with just a quarter of an hour remaining.

However, they could not hold on for an invaluable three points, with Romain Saiss grabbing an equaliser for the visitors in the 85th minute. It was a blow for the Cottagers and especially striker Aleksandar Mitrovic, who missed a number of chances as the match ended in a stalemate.

The result did lift them off the bottom of the table as they climbed above Huddersfield, but the Cottagers remain deep in relegation trouble, four points off safety.

The side had slumped to the bottom of the Premier League table after a run of six successive league defeats prior to Ranieri’s arrival.

Since the former Leicester boss took charge they have one victory, three draws and three defeats from their seven games, but he insists there are signs of progress, not least in plugging a leaky defence.

The Italian said: “I think they’ve improved a lot. I think I’ve found a solution for this team with five at the back. Of course, it’s not dogmatic.

“The team is much better, more solid and more comfortable. Of course we need something more when we have the ball because when you’re bottom, it’s not so calm, you’re a little more anxious to do something good.

“We have to continue this way. It’s the right way. It’s the second time we played in this shape and I’m very happy for this reason.”

Next up for the Cottagers is a crucial home game against fellow strugglers Huddersfield on Saturday which is followed by a London derby at Arsenal on New Year’s Day.