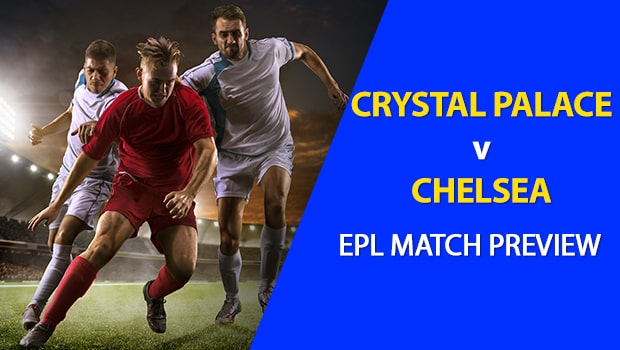 Betting on the Draw: Odds indicate there’s a 25 percent chance the match ends in a draw. There’s a draw in 28 percent of AccuScore sims, suggesting some added side value on the draw.

Last 6: Crystal Palace have 1 draw, 3 wins and 2 losses in their last six overall, with the most recent result being a 0-0 home draw vs Cardiff. Chelsea, coming off a 2-1 road win vs Watford, have 4 wins, 1 draw and 1 loss in their last six.

Some Numbers to Consider: This season, Crystal Palace average 1.32 conceded goals vs 0.89 goals scored, while Chelsea score 1.94 goals per match on average while giving up 0.83 per.

For Crystal Palace, we’ll have our eyes on Luka Milivojevic who has a 22 percent chance to score. He averages 1.47 shots overall per sim, 0.61 shots on goal per and 0.24 goals per sim.

Odds indicate there’s a 49 percent chance Crystal Palace loses by a goal or less. They either win or finish in a draw in 54-to-55 percent of AccuScore sims. All the side value in AccuScore sims for this match is on Crystal Palace to be more competitive than offshore odds are indicating.