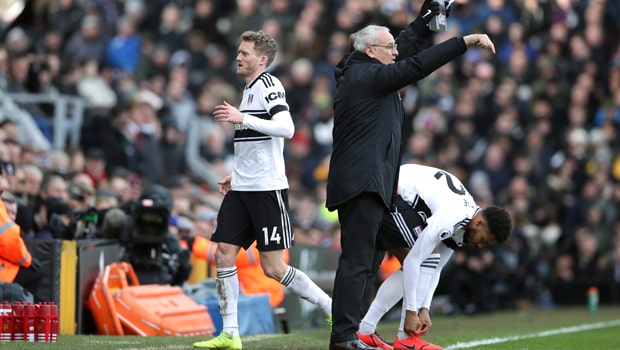 Claudio Ranieri felt Fulham lost their composure as soon as they conceded the opening goal during their 3-0 loss to Manchester United on Saturday.

The defeat at Craven Cottage leaves the Cottagers, who are priced at 1.10 to be relegated, marooned in the bottom three as they remain second-bottom and a full seven points adrift of safety.

Ranieri had been pleased with the way his side started the game, but he believes their composure went out of the window as soon as Paul Pogba opened the scoring on 14 minutes.

“I was so happy the first 10 minutes, two great chances, but after we concede that goal, they break the lines, always asking for it behind the defensive line,” Ranieri told Sky Sports.

“We had to stay calm, we lost our composure, we concede the second goal on the counter-attack. In transition, that is not possible against teams like Manchester United.”

The Italian, who has only won three of his 15 games since succeeding Slavisa Jokanovic as Fulham manager in November, was booed by sections of the home support when he replaced Andre Schurrle with Cyrus Christie during the second half of Saturday’s contest.

The 67-year-old was quick to play down that reaction after the match as his focus remains is instead on helping the Cottagers preserve their top-flight status.

“We have to work hard, it’s important to maintain the hope to do our best,” he added.

“We have to fight. We fight, but against champions the fight is not the only thing you have to do.”