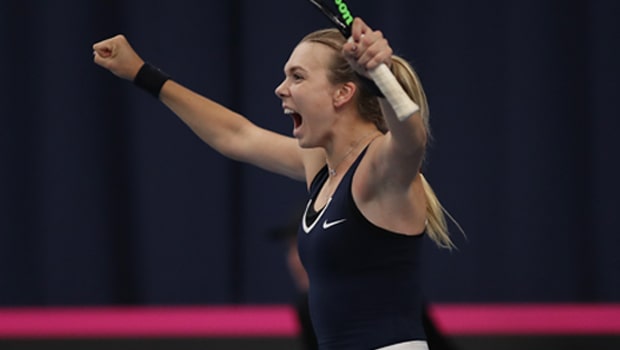 Great Britain have made it through to April’s Fed Cup promotion play-offs following a 2-0 victory over Serbia on Saturday night.

Katie Boulter got the Brits off to a flying start, coming through her match with Ivana Jorovic 6-4 6-3, while a clearly exhausted Johanna Konta, who was suffering from fatigue, battled through in three sets against Aleksandra Krunic.

Indeed, the British number one had to be helped to her feet once she wrapped up her 7-6 (7-1) 3-6 6-2 win and captain Anne Keothavong was quick to praise the battling spirit her team showed throughout this week’s action in Bath.

Keothavong told BT Sport: “The guts, the courage by Jo and Katie today… Physically, if I could tell you what’s going on behind the scenes.

“These girls are so strong. I don’t know what to say. I’m just so proud.”

Britain certainly made home advantage count as they did not lose a single rubber throughout this week’s action and their reward is a place in the play-offs for the third successive year.

GB know a victory in April’s play-offs will see them earn promotion to World Group II for the first time since 1993 and Konta is certainly hoping for another home draw.

“Here’s to hoping for a home tie in April,” Konta revealed.

Russia, Brazil, Japan and Kazakhstan are among the opponents Britain could face in the play-offs, while another three nations will also enter the draw, although their identities are not yet known.