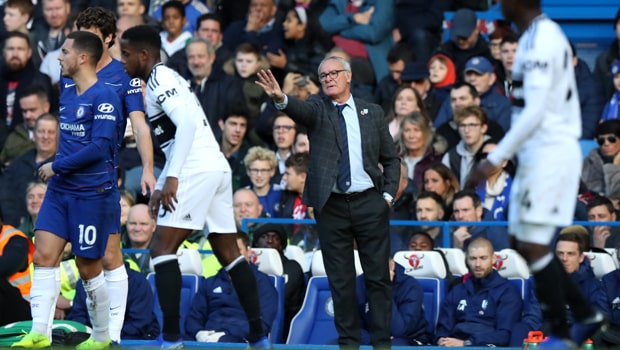 Claudio Ranieri feels Fulham are improving despite Sunday’s 2-0 defeat at Chelsea leaving them rooted to the bottom of the Premier League table.

Goals from Pedro and Ruben Loftus-Cheek were enough to hand Chelsea all three points at Stamford Bridge and the result leaves Fulham two points adrift of safety.

The defeat was also the Cottagers’ first since Ranieri succeeded Slavisa Jokanovic as manager last month, as he won his first match in charge against Southampton, but the Italian is convinced his side are improving despite the comfortable nature of Chelsea’s win.

“We made a mistake for the first goal and then in the second half we played much better,” Ranieri told Sky Sports.

“We created some chances and, of course, when you play against a big champion it’s something we had to do. We are improving. It’s a positive step but, of course, we have to react immediately.

“I am feeling good because the second half we created good problems for Chelsea and now we have to continue in this way.”

Next up for Fulham is a home clash with another of Ranieri’s former clubs, Leicester City, on Wednesday and the 67-year-old admits it will be an emotional night at Craven Cottage but he is confident his side can get a positive result.

He added: “It’s a very emotional game but it’s very important for us to make a point. I am positive we [will] have a very good reaction and I’m sure we will play well.”

Fulham are priced at 3.00 to secure all three points on Wednesday, while the Foxes, who are unbeaten in six matches across all competitions, are available at 2.38 and the draw is on offer at 3.40.