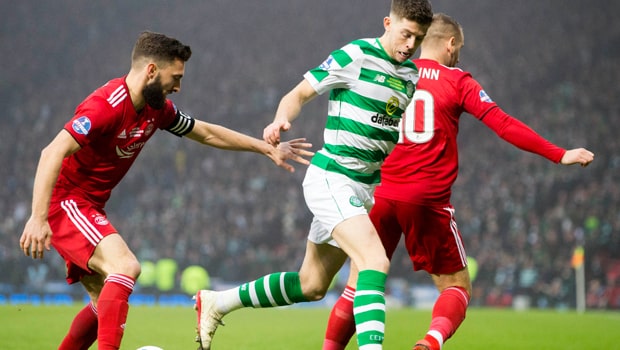 Brendan Rodgers hailed the quality of Ryan Christie after the Scotland international scored the only goal of the game as Celtic beat Aberdeen 1-0 to win the Scottish League Cup.

Christie originally joined Celtic the year before Rodgers arrived at Parkhead in 2015, but he struggled for game-time during his first two seasons with the club and spent time on loan at Inverness and Sunday’s opponents Aberdeen.

Indeed, the 23-year-old spent a total of 18 months at Pittodrie over two different loan spells and he only returned to Celtic during the summer.

The midfielder has been able to establish himself in Rodgers’ first-team plans this season, featuring in 16 matches across all competitions, with Sunday’s cup winning goal perhaps fully cementing his standing within the Celtic squad.

Rodgers has certainly been impressed by Christie’s development and he believes the ‘footballing gods’ perhaps had a role to play as he scored against his former club. “It is the footballing gods, what we’ve seen today,” Rodgers said.

“I will repeat, when I came in [Christie] wasn’t ready to play week by week, but we could see that there was a talent there.

“He came back in the summer and it was just about waiting for the moment. Like I say, football gods today, low and behold he scores against the team that he was at for 18 months. It was a wonderful finish.”

Sunday’s victory rounded off a good week for Celtic, following on from their 1-0 win over Rosenborg in the Europa League and the triumph also means they remain on course to win the domestic treble for the third successive season.

The Bhoys will return to Scottish Premiership action on Wednesday when they visit Motherwell and they are priced at 1.29 to win that match, while Stephen Robinson’s team are available at 11.00 and the draw is on offer at 5.50.