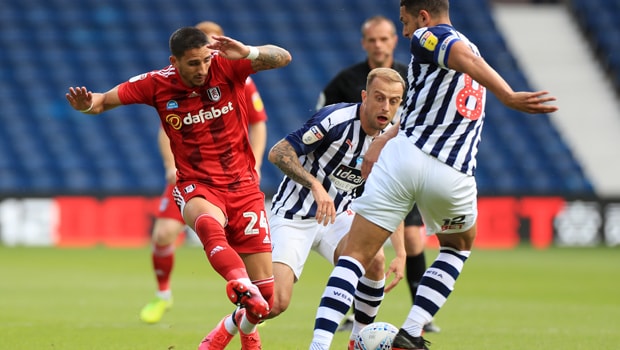 Fulham might have to settle for the playoff in a bid to win promotion back to the English Premier League a year after being relegated to the Championship.

In need of three points, the Cottagers failed to get the results needed at The Hawthorns, where chances were at a premium.

In a game of few chances, West Bromwich Albion kept holding the second spot with the draw, which increases their automatic promotion hopes.

The hosts had to stop the London club from getting the lead which could have won the game when center-back,  Ahmed Hegazi’s crucial clearance turned away Ivan Cavaleiro’s header back across goal from in front of his line.

Marek Rodak was on top of the game in a cagey affair when he denied Grady Diangana’s effort from close range after the break. Albion defender Semi Ajayi failed to find the back of the net after his two headers from corners narrowly went off target.

The closest Fulham got to scoring was through winger Anthony Knockaert’s a dipping half-volley from outside the area that struck the crossbar.

The goalless draw means the Cottagers’ chances of securing a top-two finish in the Championship are almost over.

West Brom occupies the second spot with 82 points with Leeds United far ahead with 84 points and a game in hand.

With a game in hand, Brentford is likely even to get closer to the West Brom if they will play their game today against Preston North End, as maximum points will take them a point adrift of the Hawthorn outfit.

Fulham is currently on 77 points, putting them five points away from the automatic spot with two games to go.

Although West Brom needed seven points from their final three fixtures to secure promotion to the Premier League. But Slavia Bilic’s men will still be happy to get an additional point that will always keep them in the second spot for another week.