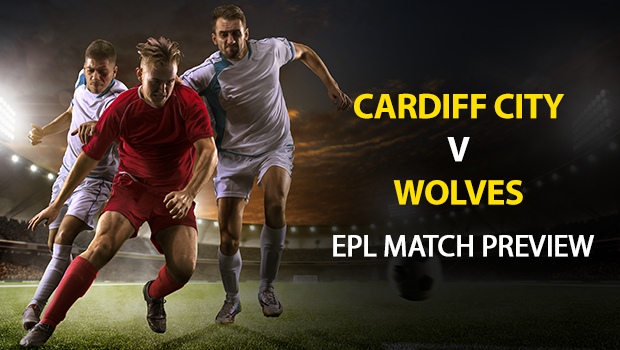 Cardiff City and Wolverhampton go head-to-head this Friday at Cariff City Stadium as both sides look to bounce back from losses the week prior. Cardiff lost 0-1 on the road vs Everton, while Wolverhampton fell 0-2 at home vs Huddersfield.

Betting on the Draw: Odds — at 3.23 — indicate there’s a 31 percent chance the match ends in a draw. There’s a draw in under 29 percent of AccuScore sims, suggesting no added value on the draw.

Last 6: Cardiff has three losses and two wins in their last six Premier League matches. Wolverhampton has four losses, 1 draw and 1 win in that same span.

Both Sides to Score: Odds indicate about a 50.2 percent chance both sides score. Both Cardiff and Wolverhampton average 1+ goals in AccuScore sims, suggesting some value on this prop bet.

Head-to-Head: These two sides haven’t faced off in Premier League action recently, but they did meet in April of 2018 in the Championship when Wolverhampton got the 1-0 win. Wolverhampton has won two of the last three meetings, overall.

Raúl Jiménez is projected to lead Wolverhampton with a 30 percent chance to net the ball. He averages close to three shots overall per sim, 1.1 shots on goal per and 0.35 goals per sim.

For Cardiff, we’ll have our eyes on Callum Paterson who has a 25 percent chance to score. Paterson averages 1.51 shots overall per sim, 0.52 shots on goal per and 0.29 goals per sim

Odds — at 2.16 — indicate there’s about a 46 percent chance for the Wanderers to win outright. They win exactly that percentage of AccuScore sims.

Wolverhampton winning is a two-star (out of four) AccuScore hot trend pick.