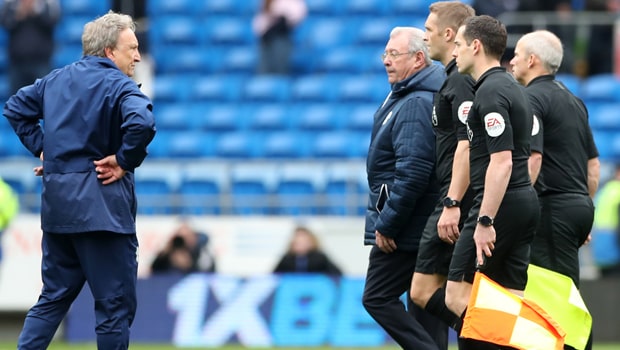 Cardiff City’s Neil Warnock has rubber-stamped his belief that the standard of referees in the Premier League is declining and he feels Mike Riley is to blame.

Warnock has labelled Riley, the head of referees, a “robot” and feels he’s responsible for similar types of official emerging.

The Cardiff manager is still smarting after Craig Pawson and his assistant failed to chalk off Chelsea’s leveller on Sunday as they came from behind with two late goals to deny the Welsh side a positive result.

Cezar Azpilicueta was clearly offside when the ball was flicked into his path to nod home, yards from the Cardiff goal, before Ruben Loftus-Cheek scored to make it 2-1 to the visitors in stoppage time.

Warnock has had his troubles with officials but says the better referees are disappearing.

“When I see people like Paul Durkin and even Graham Poll, who I had my bust-up with at Arsenal – I thought he was Arsenal’s best midfielder that day – but he was a top referee.

You have people like [Mark] Clattenburg, who are absolutely spot on and for me know the game as well as the laws,” he said.

“I think it is criminal that they are not involved. Mark Halsey – I know he has been criticised for certain things – he knew how to handle players and people. I am sure he could have given major advice to some of these referees.

“Whereas Mike [Riley], I think everybody knows I have always thought Mike Riley was a manufactured referee from the first time I ever saw him.”

Warnock went on to suggest that Riley doesn’t see the game in the same way as many directly involved would.

“It is difficult because he has been manufactured – almost like a robot – and knows everything about the rules, but these people I find struggle to understand the game and the human element and everything,” he added.