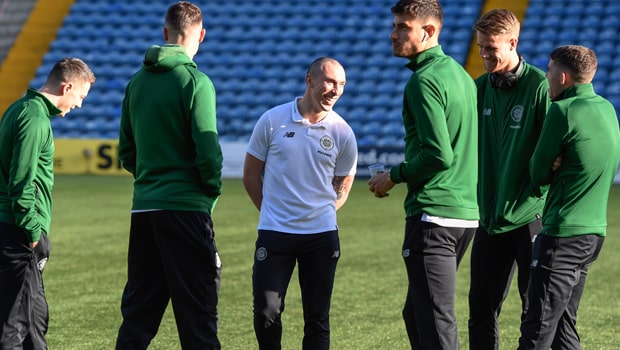 Celtic’s Kristoffer Ajer feels Scott Brown is the definition of what a club captain should be. The Hoops skipper was in the eye of a storm following Sunday’s 2-1 Old Firm win over Rangers at Parkhead.

Brown was elbowed in the face by Alfredo Morelos in the first half, with the Colombian being sent off for his troubles, while he appeared to take a slap from Ryan Kent following James Forrest’s wining strike four minutes from full-time.

At the final whistle Brown celebrated Celtic’s win – which moved them 13 points clear of Rangers and to within touching distance of their eighth successive Scottish title – near the pocket of travelling fans inside Parkhead.

For Ajer, himself crucial in Celtic’s victory, Brown is the embodiment of an inspirational skipper. “People can criticise Scott but for me he is the definition of how a captain should be.

He is a top-class captain when he is on the pitch but also in the dressing room too,” said the young central defender.

“He is always doing what he can to help the team every day and I think he is the perfect captain. I admire him a lot because he is there to get the best out of the team and he does that.”

Rangers had beaten Celtic at Ibrox in December when they last clashed and Ajer hinted that their fierce rivals hadn’t been too shy in celebrating that win when it was their turn.

“I think when you play such a big game and you know how much it means then there is a lot of excitement there,” he said of the full-time celebrations.

I think Rangers enjoyed the result back in December.” Celtic are 6.50 to beat St Mirren 3-0 on Wednesday evening.