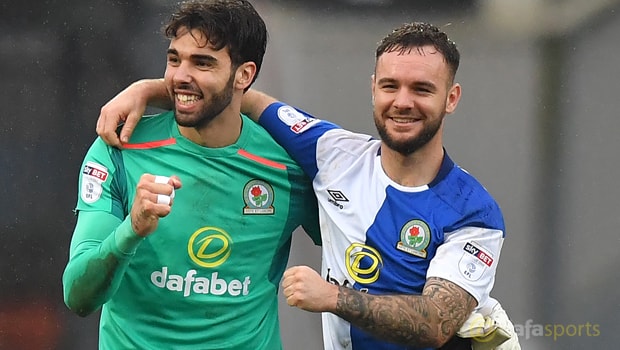 Tony Mowbray believes in-form goalscorer Adam Armstrong can keep up his momentum between now and the end of the season.

The on-loan Newcastle forward has scored seven times in seven games lately, including a crucial brace against Blackpool last time out.

Armstrong’s goals could be key as Mowbray and Blackburn look to hold onto top spot in League One or, at worst, secure automatic promotion.

“He’s a young lad learning the game, and I’m sure [Newcastle manager] Rafa Benitez will see the video clips of all of the goals he’s scoring,” said Mowbray.

“He scored a fantastic goal against Wigan and two more brilliant goals against Blackpool.

“Goals like his second one on Saturday are never easy but he kept it down and put it into the corner.

“He also works extraordinarily hard, it’s not as though he’s a striker who just stands there – I’ll look forward to him scoring many more goals.”

Armstrong also shone during a loan spell under Mowbray at Coventry in League One.

The Ewood Park outfit have taken over top billing in a three-way fight with Shrewsbury and Wigan at just the right time and Armstrong will be crucial in the closing weeks of the season.

“I had him at Coventry too, where he scored 20-odd goals in super-fast time,” Mowbray added.

“He’s a young guy who has come from a top-flight club and, with all respect to League One, I’d suggest that with his attributes and quality, he’s better than League One.”

Blackburn are 1.80 to win away at Gillingham on Saturday and Rovers are 2.25 to win League One this season.