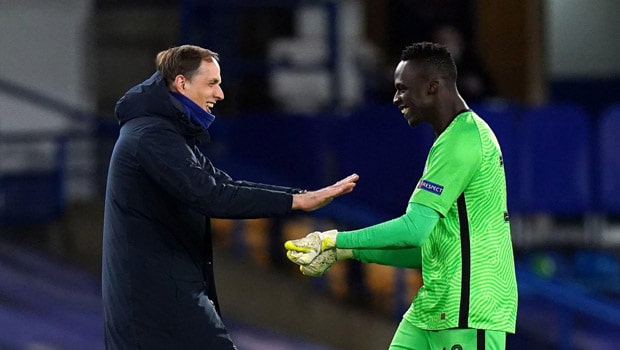 With the UEFA Champions League final clash with Manchester City looming this weekend, Chelsea manager, Thomas Tuchel is hopeful to have his first-choice goalkeeper Edouard Mendy ready for the big game.

The goalkeeper was replaced by Kepa Arrizabalaga at halftime after colliding with the goalpost in an attempt to keep out Bertrand Traore.

However, Chelsea lost 2-1 to the Villa Park side but still managed to move into the top four for the UEFA Champions League after Tottenham’s 4-2 victory at Leicester City.

Meanwhile, Thomas Tuchel hopes the goalkeeper will be in training on Wednesday after improving on his pain management on Monday

“We still have hope that he joins training on Wednesday and he joins the group, He’s made a huge improvement in the management of pain. So we need a further update on Wednesday but we hope to have him back in training.” Tuchel said.

While Manchester City emerged champions of the Premier League for the 2020/2021 season Chelsea lost the FA Cup final 1-0 to Leicester City.

Meanwhile, Manchester City will be playing their first-ever European final but manager Pep Will be hoping to win his first Champions League title since leaving Barcelona.

Manchester City finished top of the Premier League table with Manchester United followed in second while Liverpool ended the season in third.

Chelsea finished the fourth position while Leicester City and West Ham qualified for the Europa League after finishing fifth and sixth position.