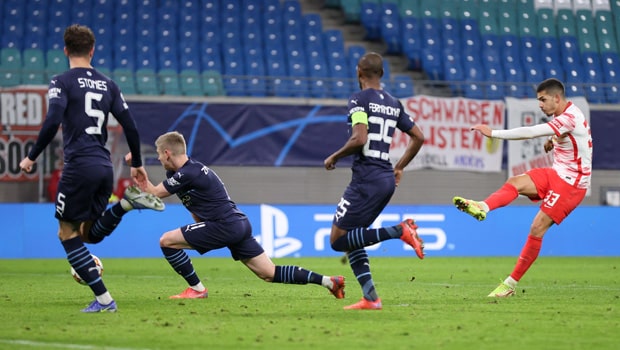 Manchester City are still without a clean sheet in Champions League this season as they fell short to RB Leipzig at Red Bull Arena, 2-1, in their final match of Group A play. City are still atop the Group A table with 12 points, followed by Paris Saint-Germain (11), RB Leipzig (7) and Club Bruges (4).

“We wanted to have fun in our football again,” Leipzig’s Konrad Laimer said. “We did that well over the 90 minutes today and deservedly got the three points. We wanted to find more solutions when in possession and could have even scored one or two more.”

City and PSG are in the knockout rounds, with Leipzig taking a tilt at the Europa League.

“The first half, we lacked a little bit of rhythm,” City manager Pep Guardiola said. “They have a really good team, we knew it from before the group stage. But the second half was much better, but unfortunately, one or two mistakes and they punished us. We played better in the second half. We were more aggressive, we played to win the game and we lost it. Congratulations to Leipzig.”

City won the possession battle 56-44, and had 13 shots overall to 9 for Leipzig. Leipzig did have five shots on goal, though, compared to 3 for City. Every single one of Leipzig’s shot attempts came inside the box.

Leipzig’s Andre Silva has now scored as many Champions League goals this season (3) as he has in the Bundesliga.

“We made it! It’s an important win for us tonight and we won’t stop fighting for more,” Silva said on Twitter after the match.

City’s Kyle Walker was given an immediate red card and sent off for an unnecessary tackle on Silva in the second half (83’). Walker will miss the first leg of the Champions League round-of-16 in February.

“It was a red card – definitely,” Guardiola said. “I’m not coming here to say what happened in the dressing room.”

Walker is the second-oldest Englishman to be sent off in a Champions League match, after Paul Scholes vs Roma in April 2007.

“We made an incredible group stage, we qualified with one game left in a tough group,” Guardiola added. “I am more than satisfied with the performance in every single game and in February, hopefully we can arrive in the best condition possible.”

While the likes of Dominik Szoboszlai (24′) and Silva (71′) will get much of the spotlight for their goals, the engine driving everything was Emil Forsberg. He controlled the midfield, even played as a forward, and picked up an assist for his efforts.

Leipzig, currently 11th in Bundesliga, are back in action this Saturday, 11 December vs Monchengladbach.

Manchester City, first in the Premier League, are in action Saturday, 11 December, vs Wolves.