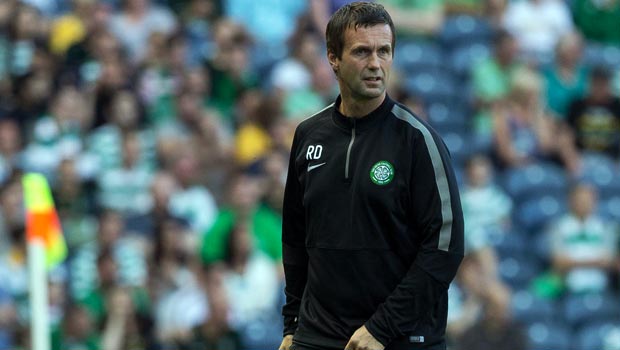 Celtic boss Ronny Deila is not giving up on qualifying for the Champions League group stages despite his side going down 4-1 against Legia Warsaw in their third qualifying round first leg in Poland on Wednesday night.

The game started well for the Scottish Premiership champions as Callum McGregor put them ahead inside the opening 10 minutes.

However, Miroslav Radovic’s brace had the hosts in front by the 36th minute, before Celtic were reduced to ten men when Efe Ambrose was sent off in the 44th minute for a professional foul on Michal Kucharczyk.

Ivica Vrdoljak spurned the opportunity to extend the Legia Warsaw lead further when he twice missed from the penalty spot, but Michal Zyro and Jakub Kosecki both scored in the final six minutes to give them a healthy lead to take to Murrayfield for next week’s second leg.

Despite the need for a 3-0 win in order to progress to the next stage of qualifying in a bid to reach the lucrative group stages, Deila is trying to stay confident.

“I’m unbelievably disappointed. We started well and then conceded an easy goal. We lost our heads,” he said.

“We lost the ball in the centre of the pitch so many times and the back four didn’t stay together. They got easy chances, and then there was the red card and after that it was a totally different match.

“Worst of all is the commitment. We needed much more energy in the game. We did not stay together for 90 minutes. That’s what concerns me the most.

“We still have a chance if we go to Murrayfield and have the supporters behind us as I know we will.”

He added: “It is possible to win 3-0 again – like we did last year in the play-off. But we have to learn from this week. We need a whole different attitude and discipline in our play.”