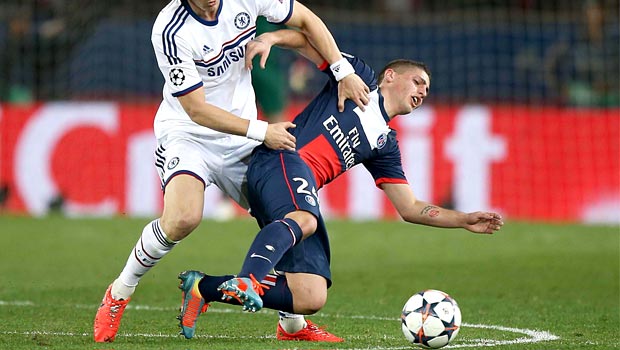 Marco Verratti has warned his Paris Saint-Germain team-mates that they cannot afford to get complacent despite leading Chelsea 3-1 in the quarter-finals of the Champions League.

Despite their imperious form so far in the tournament, Les Parisiens , who are 8.50 to win the competition, were seen as the underdogs going into the clash with the Blues but outclassed Jose Mourinho’s men, with strikes from Ezequiel Lavezzi, Javier Pastore and a David Luiz own goal giving them a distinct advantage.

Eden Hazard’s first-half penalty has given the Londoners a ray of hope though and they are certainly no strangers to overcoming two-goal deficits, having famously recovered from a 3-1 defeat in the last 16 to Napoli on their way to winning the competition in 2012.

PSG have been excellent this season and are currently on course to claim their second straight Ligue 1 title but they have bigger aspirations, with European glory their ultimate goal.

Verratti knows that the second leg at Stamford Bridge is by no means dead and says going into the game, which they are 4.54 to win, with the draw at 3.33 and Chelsea at 1.82, his side will need to be just as focused as they were at the Parc des Princes.

“Three goals are nothing,” he told Gazzetta dello Sport. “They put us in trouble in the first half, I was under a lot of pressure with the ball, but in the second half our coach Laurent Blanc explained that the only way to win was to play as we know how.

“He was right, but there are 90 minutes to go and in the end even at 3-1 it can be considered only a small advantage.”