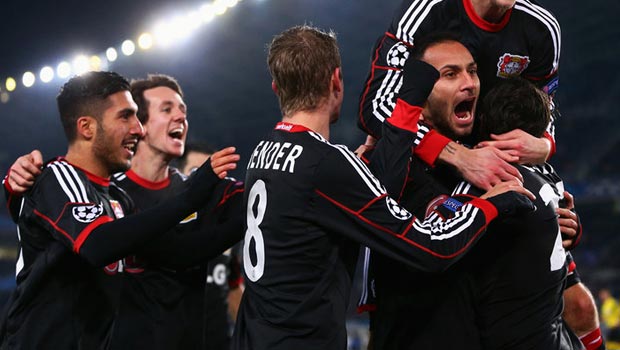 Bayer Leverkusen will aim to stop free-scoring Paris Saint-Germain in a bid to reach the quarter-finals of the Champions League for the first time since 2002.

That was the year that the Bundesliga outfit reached the final in which they lost to Real Madrid, and in the intervening years they have struggled to recapture those heights.

Their last venture into the knockout stages two years ago saw them trounced 10-2 on aggregate by Barcelona, and now, having finished second to Manchester United in Group A, Sami Hyppia’s side will be determined not to ship as many goals when they face the might of PSG, managed by Laurent Blanc.

Leverkusen were beaten 5-0 by Manchester United at the BayArena in the group stage back in November, their heaviest home defeat in Europe, but can take heart from the fact that their record against French sides in Europe is pretty impressive, having won four of six meetings.

Blanc has some history against German sides though, having overseen both home and away victories over Bayern Munich in the 2009/10 group stage when in charge of Bordeaux, and now manages a side that is crammed with expensive players and currently riding high at the top of the French league.

PSG scored 10 goals in three away games in Group C, beating Olympiacos 4-1 and Anderlecht 5-0 before suffering their first defeat in seven away matches in Europe when going down to a 2-1 defeat at Benfica.

Leverkusen can take heart from PSG’s latest domestic results though – the Paris outfit have drawn their last two away games in Ligue 1 – including against lowly Guingamp in which they were two minutes away from losing, so they are not unbeatable.