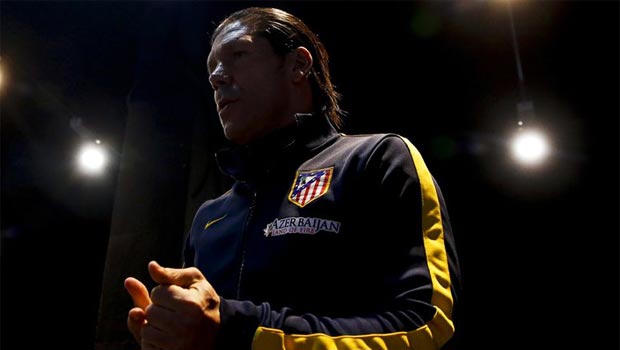 Diego Simeone expects an open contest with both teams playing attacking football when his Atletico Madrid side meet ‘European powerhouse’ AC Milan at the San Siro.

The Argentinean coach knows all about the atmosphere that awaits Atletico Madrid, having been an Inter player for two years, and he says the Spanish club will not be the favourites in the Champions League last-16, first-leg clash.

Atletico cruised through the first phase to earn themselves home advantage for the second leg while AC Milan won only two group matches, both against Celtic, to progress behind Barcelona – while their domestic form has been inconsistent.

Clarence Seedorf took charge of the Rossoneri when Massimiliano Allegri was fired last month and Milan remain in a lowly ninth position in Serie A, relying on a mercurial strike from Mario Balotelli to defeat relegation-haunted Bologna on Friday.

Related: Clarence Seedorf is getting his players set for a showdown with high-flyers Atletico Madrid

“We do not consider ourselves favourites,” said Simeone. “We have to show we are better than them on the pitch.

“We need to be focused and play with intensity. It will be a great game for the fans. Both teams will play attacking football, so it will be important to defend well and not concede.”

Atletico’s impeccable defensive record in La Liga, where they have conceded only 16 in 24 matches – one fewer than Barcelona – is matched by their ability to keep clean sheets in Europe.

Simeone’s side, who are 3.2 to Win to Nil, have conceded only three times in nine hours of Champions League football this season and arrive in Milan fresh from a 3-0 home win over Real Valladolid.

First choice left-back Felipe Luiz is out for Atletico but Simeone has all his other big guns available for the match while Seedorf is without Robinho (thigh), Stephan El Shaarawy (foot) and Valter Birsa (thigh).

The Milan boss may also have to start without Brazilian playmaker Kaka who sustained a knock against Bologna.

Seedorf said: “He is not yet at his best. We are monitoring his condition – we hope he can recover.”