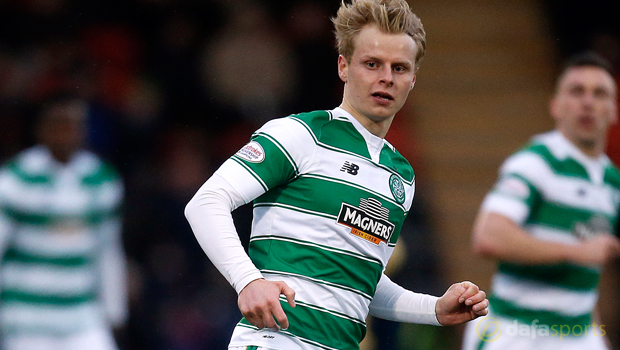 Celtic midfielder Gary Mackay-Steven wants the Scottish champions to put their ‘foot on the gas’ as they set off in pursuit of this season’s title.

Ronny Deila’s side have been put under increasing pressure by second-placed Aberdeen this season but the Glasgow side have now managed to put four points between themselves and Derek McInnes’ Dons.

Celtic restart after the international break with a home clash with Hearts, currently third, on Saturday and Mackay-Steven wants to push on against the Jambos.

He feels it is important that Celtic begin the final phase of the season on the front foot.

Hearts held the Hoops when they last met in Edinburgh and Mackay-Steven feels a quick start can help Celtic avoid any more points being dropped.

“They have acquitted themselves really well this season. They have a good manager in Robbie Nielson who has bought well, and they have a strong, big squad who are always dangerous. It won’t be an easy game,”
he said.

“We drew the last time we played them and it was a little bit frustrating for us, but if we can go and really put the foot on the gas from the start, then we can go and win this time.”

Aberdeen faltered last time out, losing to Motherwell, leaving Celtic with a four-point gap and a game in hand on the side from Pittodrie.

Mackay-Steven does not want to see the gap at the top decreasing with the final target now coming into sight for Celtic.

“Now that the finishing line is in sight, we feel like we want to go on a run and show that we are the best team in the league. There are four points in it just now and if we can just extend that and keep taking care of things ourselves, I’m sure we will go on and win the trophy,” he added.