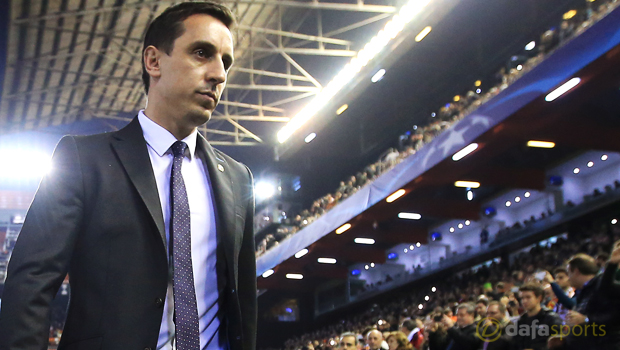 Gary Neville has been sacked as manager of Valencia after less than four months in charge at the Mestalla.

The former Manchester United and England defender took over at the La Liga outfit in December but lasted just 28 games in Spain.

Neville managed to win only three of the 16 La Liga games he took charge of and his side had lost their last three games prior to his sacking.

Valencia have slipped to 14th position in the table, just six points clear of the relegation zone under the watch of Neville.

The club also found itself eliminated from the Champions League, the Europa League and the Copa del Rey this season under the guise of the England coach.

Neville returned from England duty after Tuesday’s friendly defeat to the Netherlands only to be told that Valencia were cutting short his time at the club, with who he had signed an initial deal to remain in charge until the summer.

Neville’s younger brother Phil is also part of the Valencia coaching team and will be retained, as is the man that Neville senior brought in as his assistant, Pako Ayestaran, who was given charge for the remainder of this season.

In a statement released after his sacking, Neville admitted he knew the reasoning behind Valencia’s decision.

He said: “I would have liked to continue the work I started, but I understand that we are in business based on results and in 28 games we have seen 10 wins, seven draws and 11 defeats, which is not the level demanded by me or by this club.”

Valencia face Las Palmas, the team directly below them in the table, on Saturday. They are 3.00 to win that that game with the home side 2.40 and the draw 3.25.