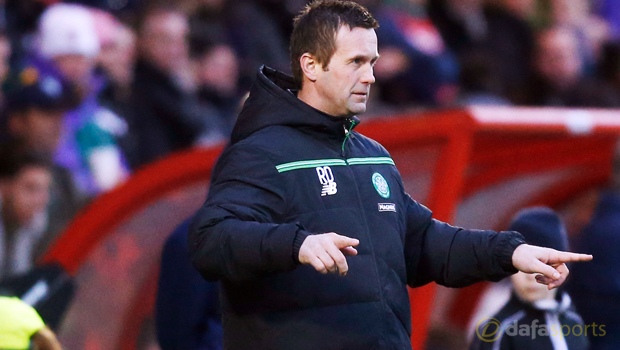 After a tumultuous week that saw his Celtic side eliminated from League Cup by Ross County and caught by Aberdeen in the league, Ronny Deila admits he was just happy to get past non-league East Kilbride in the Scottish Cup.

It has been a testing week for the Norwegian and he conceded after watching his team labour past the brave part-timers that defeat would more than likely have meant the end of his tenure in Glasgow.

The Celtic boss however feels the manner of the win against East Kilbride will be long forgotten if they can go on to raise the Scottish Cup at Hampden Park in May.

“We wanted to score more goals and we had our chances. Normally, we should have scored even more. But no-one will remember that if we win the cup,” said Deila.

“It would have been very hard if we had lost this one today. So it was a crucial victory. But I was quite comfortable during the match.”

Leigh Griffiths scored in the first half from close range following a corner while new signing Colin Kazim-Richards bundled home his first goal as a Celtic player to secure the win shortly after half time.

Deila praised the non-league side for the manner in which they approached the game and said their performance was a credit to them.

“I will of course give a lot of credit to East Kilbride. They fought really hard and tried to play football as well, which was positive,” he added.

“You never know in football, but it would have been the biggest surprise in football for a lot of years. But it didn’t happen and I’m very happy for that.”

Aberdeen joined Celtic on points at the top of the Scottish Premiership courtesy of their win over St Johnstone on Saturday, just four days after they beat Celtic at Pittodrie.

The Dons are 8.50 to be Scottish champions this season while Celtic are 1.07 to win the title.