Rickie Fowler vows to get over painful Phoenix loss

Posted by Jason Stepford on February 8, 2016 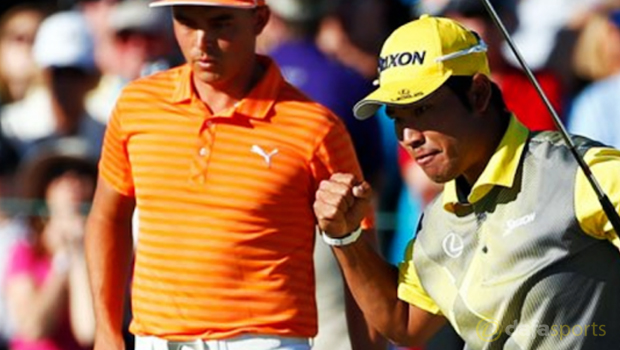 Rickie Fowler saw victory in the Waste Management Phoenix Open ripped from his grasp in Arizona and then vowed to quickly get over the pain of defeat.

The American said the sole consolation from his play-off defeat to Hideki Matsuyama amongst the raucous crowds in Phoenix was that he knows he is still playing well enough to win.

Fowler jumped to a career-high fourth in the world golf rankings with his win in Abu Dhabi in January, and he seemed to have secured victory number two for 2016 as he built a two-shot lead with two holes to play on Sunday.

However, his tee-shot at the short par-four 17th took a huge kick forwards and finished up in a water hazard beyond the green.

Fowler made bogey while Matsuyama picked up a shot to go up the final hole on terms. The Japanese rolled in his birdie putt before Fowler answered with one of his own to force extra holes.

The fourth play-off hole – the 17th once again – incredibly saw Fowler tug his tee-shot left and into the water again, allowing Matsuyama to take the win.

Fowler had his entire family in Arizona, many of whom had never seen him win on Tour before, and afterwards he admitted it was a tough loss to accept.

“It’s gonna hurt,” said Fowler, “because I felt like I had it, especially with the way I was swinging.”

Fowler has been hotly tipped to secure his maiden major championship success this season and, despite clearly looking emotional, he vowed to get back on track quickly.