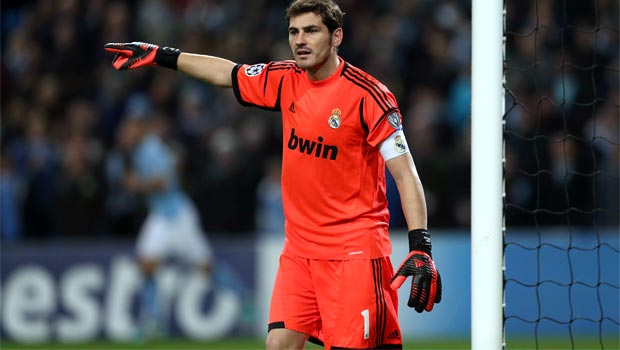 Real Madrid goalkeeper Iker Casillas has rubbished reports he is looking to leave the club in January and insists he “belongs” to Los Blancos.

The Spain international has found life at the Bernabeu tough this year since losing his place in the starting XI to Diego Lopez while Jose Mourinho was in charge.

A change in management was expected to result in Casillas being restored to the first team but current head coach Carlo Ancelotti has kept faith with Lopez.

The 32-year-old’s lack of game time has seen him linked with a move away from the Spanish capital, with Manchester City and Arsenal said to be interested.

The keeper has revealed his frustration at no longer being the first choice at Real in the past and is thought to be worried about losing the number one jersey in the Spanish national side as well.

However, Casillas has now reiterated his commitment to Real, insisting it will be a long time before he decides to call time on his love affair with the club.

“Many people are speculating about my situation,” he said. “It’s not the same as it has been in recent years.

“Every day rumours appear and whilst these stories appear, I belong to Real Madrid, which is the club of my life.

“I want to stay here. Right now, my decision is to stay at Real Madrid. I want to get the 10th [European Cup], more trophies and more league titles.”Casillas went on to say that he felt having Lopez at Real was keeping him on his toes, claiming he likes the competition.

“It’s the coaches who decide what’s best,” he said. “I don’t have a problem with that. I compete. I like the challenges.

“Whenever I was in the spotlight, I wanted to show why I was there. Competition is a good thing and I’m not worried. My intention is to train well and enjoy myself.”