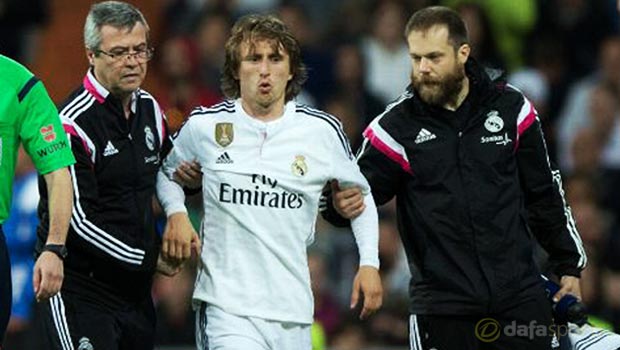 Croatia’s national team doctor has blamed Carlo Ancelotti for the latest injury suffered by Luka Modric, who could be ruled out for the rest of the season.

The 29-year-old has already spent four months on the sidelines this season due to a hamstring problem but, following last month’s return, looks set to sit out the rest of the campaign after suffering a knee injury during Real Madrid’s 3-1 win over Malaga on Saturday.

There is a hope that Modric could be fit for the Champions League final on June 6 – if Real get there – but Croatia medic Boris Nemec feels that the injury could have been avoided.

“Ancelotti didn’t spare Luka at all after he returned from his long-term injury,” Nemec is quoted as having told Bulgarian network Nova TV.

“He played 90 minutes in every match. Ancelotti has put Modric under a lot of pressure, instead of giving him time, little by little.

“Modric didn’t get injured because of the knock he received but because he was not 100 per cent ready.

“If he hadn’t been overworked, his lower leg wouldn’t go to the side in that tackle and crack.”

Real will be without Modric when they host Atletico Madrid in the second leg of their Champions League quarter-final tie, which is evenly poised at 0-0, a game Gareth Bale is also set to miss after sustaining a calf injury against Malaga.

Defender Marcelo is suspended for the European tie although Ancelotti will be hopeful that Karim Benzema can shake off a knee problem to take his place in the line-up.

Los Blancos remain 1.83 favourites in the match betting on Wednesday night, despite having failed to win in their last seven against Atleti, with Diego Simeone’s men on offer at 4.50 and the draw at 3.50.