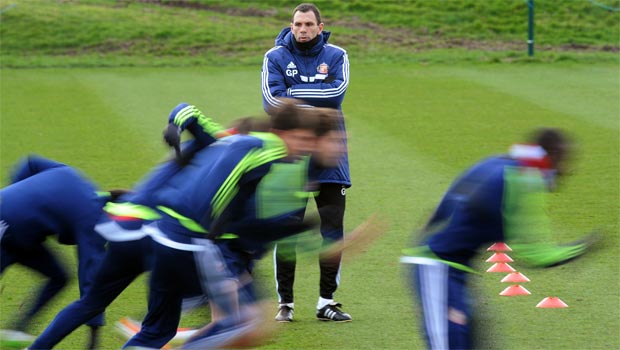 Sunderland manager Gus Poyet faces a Wembley selection dilemma with a near fully fit squad to choose from for Sunday’s Capital One Cup final against Manchester City.

Sunderland can forget their relegation worries for 24 hours at least when they bid for their first cup success since the glorious FA Cup win over Leeds United in 1973.

Steven Fletcher and Carlos Cuellar have returned to training after long spells on the sidelines while Wes Brown is available for selection again after serving a two-match suspension.

Having a fully fit squad at his disposal is good news for Poyet, but it also means some tricky decisions as he can only bring a certain number of players to Wembley.

With injured goalkeeper Keiren Westwood and cup-tied midfielder Liam Bridcutt the only definite absentees, Poyet must leave an additional six players out of his match-day squad and he knows it will be tough on those who miss out.

“Apart from Westy, which is a long-term injury, every single player is fit – even the ones who are not available, like Liam who is cup-tied,”
Poyet told the club’s official website.

“This week, everybody’s there. If nothing happens, there’s going to be a big decision for me and, I hope, big understanding from the players.

“It’s hard for people who have been involved and playing, not only in the league but especially in the cup.

“They have helped us get there but everybody is fit and I am only allowed to take a certain number of players, so it’s going to be hard for a few.”

Poyet could take a gamble on the fitness of Scotland international Fletcher who was close to a return on Saturday against Arsenal and unlucky not to have been named on the bench.

However, the former Wolverhampton Wanderers striker has struggled with niggling injuries all season and has found it hard to rediscover his prolific goalscoring touch.

Italy international Emanule Giaccherini may also have played his way into contention following a great consolation goal at The Emirates Stadium while fellow countryman Fabio Borini must surely figure after his heroics in the Capital One Cup this season.

Sunderland are 5.54 underdogs to lift the trophy at Wembley with quadruple-chasing Manchester City the overwhelming 1.14 favourites to have their ribbons tied around the Capital One Cup.