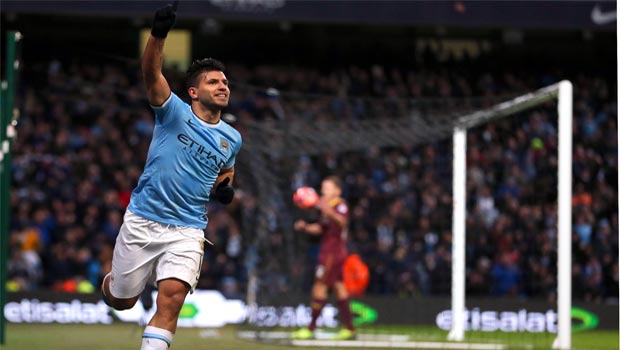 Manchester City’s top scorer Sergio Aguero is in contention to face Sunderland in Sunday’s Capital One Cup final after returning to training on Tuesday.

Aguero has been sidelined for the past month with a hamstring injury which he picked up shortly after scoring in Manchester City‘s 5-1 win at Tottenham.

City’s fortunes have taken a turn for the worse since Aguero’s injury with Manuel Pellegrini’s side failing to score in three of their five matches, a run which included damaging defeats to Premier League title rivals Chelsea and Champions League last-16 opponents Barcelona.

But the 25-year-old frontman has lifted spirits inside the City camp by coming through a first-team session with no reaction to put himself in with a strong chance of featuring at Wembley.

Pellegrini has admitted that Alvaro Negredo and Edin Dzeko have not been 100 per cent fit during the interim, while Stevan Jovetic was replaced against Stoke after suffering from cramp.

However, all four could be available for Sunday as the Chilean coach hunts the first trophy of an improbable ‘quadruple’.

City midfielder Samir Nasri admits that Aguero’s return would be a big boost, although he would feel confident going into the clash with any of the four strikers at Pellegrini’s disposal.

The Frenchman said: “It is going to be a big boost for the team [having Aguero back], but you cannot disrespect Alvaro Negredo and Edin Dzeko.

“They have done a great job too. It will be good when another striker comes, and with Stevan Jovetic and them we can rotate and be more fresh.”

City are 1.14 favourites to lift the Capital One Cup while Sunderland head to Wembley as big underdogs, available at 5.54 with dafabet.