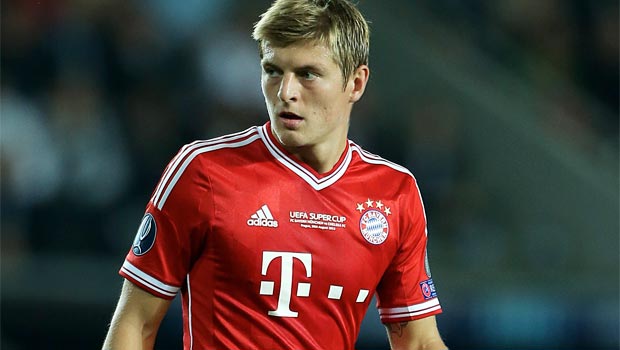 Bayern Munich are confident of keeping Manchester United target Toni Kroos and claim the German midfielder will soon commit his long-term future to the club.

Kroos’ current contract with the Bundesliga giants expires in June 2015 and talks over an extension have dragged on for some time amid claims that Kroos wants pay parity with Bayern Munich‘s top earners like Philipp Lahm.

Bayern’s honorary president Franz Beckenbauer recently warned the midfielder not to hold his paymasters to ransom while boss Pep Guardiola appeared to suggest that the club could cope without him if he had made his mind up to leave.

Manchester United‘s interest has been well documented with Red Devils boss David Moyes having watched him personally on at least three occasions.

Kroos has previously insisted that he is happy at the Allianz Arena, and hopes are high that he will put pen to paper in the near future.

Financial director Jan-Christian Dreesen says Bayern will be making a big effort to keep the player and will highlight the success he can achieve at the club.

“We are ready to keep on discussing with Toni Kroos and I am hoping to be able to see these talks end successfully,” Dreesen told Sport-BILD.

“We are about to put up something substantial in this respect.

“We really want to appreciate the performances of Toni. We are serious and sustainable. At our club you will enjoy success.”

Bayern are of course well on their way to a successful defence of their Bundesliga title, holding a 19-point advantage over second-placed Bayer Leverkusen, face Kaiserslautern in the DFB-Pokal semi-finals and took a big step towards the Champions League quarter-finals by beating Arsenal 2-0 at the Emirates.

Manchester United by contrast have had a dire season, holding slim hopes of finishing in the top four let alone winning the title, while they were dismal in a 2-0 defeat at Olympiakos in their Champions League last-16 first-leg encounter on Tuesday night.