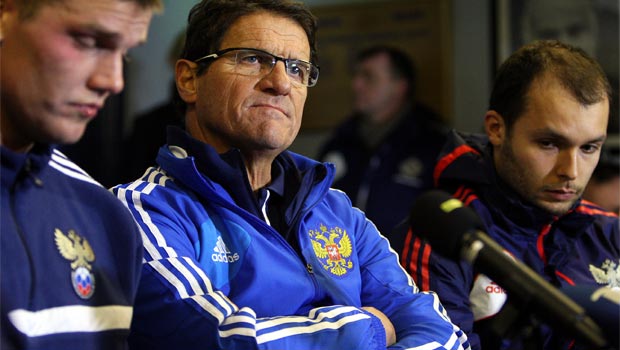 Former England boss Fabio Capello is the early leading candidate to be the next manager of Tottenham following the departure of Andre Villas-Boas.

AVB said he would not walk away from White Hart Lane following the 5-0 drubbing dished out by Liverpool on Sunday afternoon and Spurs have issued a statement saying the decision was made by ‘mutual consent’.

The pressure had been building on Villas-Boas to deliver ever since he went on a mammoth spending spree in the summer and it reached boiling point in recent weeks following some poor performances on the pitch, including a 6-0 defeat at Manchester City.

Spurs currently sit seventh in the table, five points off the top four and that is not good enough for chairman Daniel Levy and his board of directors, who want Champions League football.

A statement from the club on Monday morning read: “The club can announce that agreement has been reached with head coach, Andre Villas-Boas, for the termination of his services.

“The decision was by mutual consent and in the interests of all parties. We wish Andre well for the future.

“We shall make a further announcement in due course.”

Capello is now the number one contender to take charge, while Swansea boss Michael Laudrup is also being mentioned as a possible candidate.

The Dane has worked wonders at the Liberty Stadium when guiding the Swans to Capital One Cup glory and his style of attractive football would certainly go down well at White Hart Lane.

Harry Redknapp has also been linked with a shock return, with Dutch master Guus Hiddink also getting a mention.