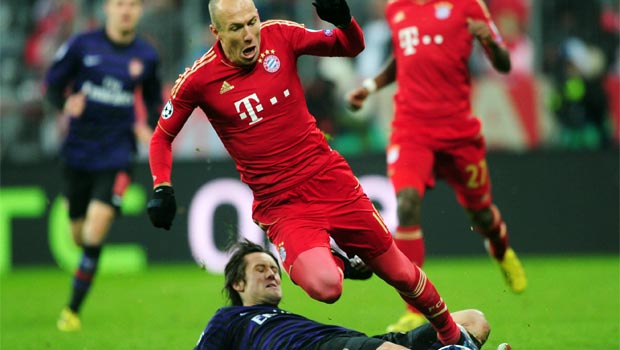 Arsenal will go head-to-head with defending champions Bayern Munich in the last 16 of the Champions League after the draw was made in Nyon on Monday.

The Gunners did well to make it through a very tough looking group stage but have ultimately paid the price for losing to Napoli in the final game, which meant they had to settle for second place and a tough draw.

It could not get much harder for Arsene Wenger’s men next as they will take on Bayern over two legs for a place in the quarter-finals, with the first clash due to take place at the Emirates Stadium on either February 18-19 or 25-26.

Manchester City, who finished second to Bayern in their group, have also been handed a tough draw as they will face Barcelona, winners in 2009 and 2011.

City will take confidence from beating Bayern 3-2 in the last pool game and may fancy their chances against a Barca side that will probably be missing the injured Lionel Messi.

Meanwhile, Chelsea are set for a reunion with Didier Drogba after being drawn against Turkish side Galatasaray, while Manchester United have landed Greek champions Olympiakos.

Elsewhere in the draw, Real Madrid will face Schalke, while last year’s runners-up, Borussia Dortmund, will take on Russian side Zenit St Petersburg.