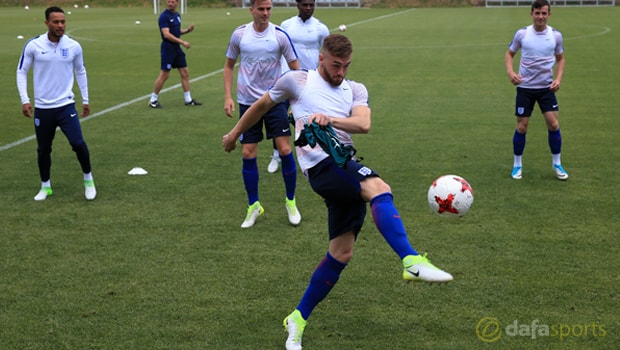 England have looked impressive during the tournament in Poland so far and they topped Group A, drawing 0-0 with Sweden before beating Slovakia 2-1 and then the hosts 3-0.

The Young Lions, who last won the event in 1984, have shared the goals around the team with Lewis Baker, Demarai Gray, Alfie Mawson, Jacob Murphy and Nathan Redmond all registering a goal.

A strong defence has also been key in making it to the semi-finals with Aidy Boothroyd’s men conceding just one goal, giving them the joint-best defensive record alongside Germany and Spain.

England have now been handed a last-four clash against the German’s and Chambers, who has been a key cog at the back during the tournament, is confident a positive result can be obtained.

He told the FA’s website: “It’s a massive game and everybody’s looking forward to it. Once we got through, we were ready to take on anybody and once it was Germany, it has that little edge.

“Everyone’s excited about it and I think we can go into Tuesday with a lot of confidence, we’re looking forward to this challenge.”

England are 3.00 to win the match, a draw is priced at 3.30 whilst Germany, who lifted the trophy back in 2009, are the narrow 2.40 favourites to progress into the final.

The second semi-final involves Spain and Italy with the former 1.67 favourites to pick up the win, a draw is a 3.80 chance whilst the Italians are the 5.25 outsiders.