Rafael Nadal not at Wimbledon level 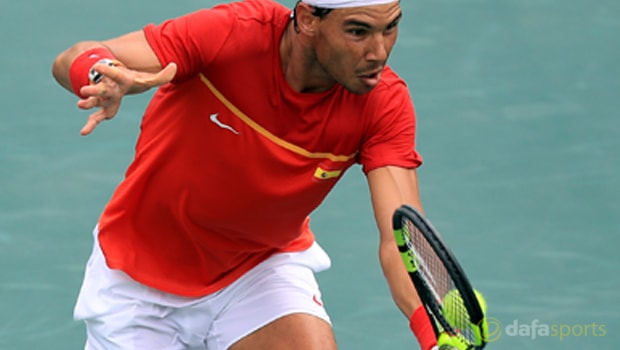 Rafael Nadal admits his game is not currently at the level required to seriously challenge for Wimbledon glory but he has vowed to practice tirelessly ahead of the third Grand Slam of the season.

Nadal has enjoyed a resurgence in form this year and he narrowly missed out on a second Australian Open title in January, losing out to Roger Federer in an epic five-set final.

The Spaniard, who is dubbed the ‘King of Clay’, did manage to clinch a record 10th French Open crown at Roland Garros last month when comfortably beating Stanislas Wawrinka in the final.

That was the 31-year-old’s fourth title of 2017, having previously triumphed at the Monte-Carlo Masters, Barcelona Open and Madrid Open – taking his career haul to 73.

Next up on the schedule is a trip to the All England Club and the world number two will be aiming for a third Wimbledon crown, and a first since 2010.

Nadal may be priced at 5.25 to win the event at SW19 but the Manacor-born star is feeling less optimistic of his chances ahead of the tournament, which runs from July 3-16.

“My current level is not enough to compete the way I want in Wimbledon,” he said.

“I will practice for seven days in London, where I will play two exhibition matches that hopefully will be useful.

I have not been playing on grass for two years and we will see if I will be at a good level.”

Defending champion Andy Murray, who suffered a surprise first-round exit at Queen’s last week, is 4.33 to retain his title, just behind 3.00 favourite Federer.

Serbian Novak Djokovic, who has been struggling for form in recent months, is a 7.00 chance whilst Canadian Milos Raonic, who lost in the final last year, is a 15.00 shot.