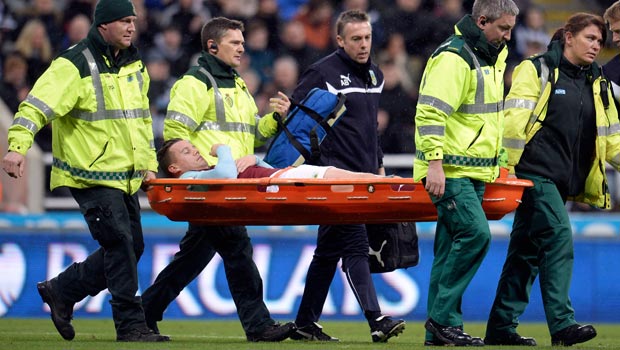 Burnley manager Sean Dyche has suffered a huge injury blow after he confirmed Kevin Long will be missing for the rest of the season.

The 24-year-old, who moved to Turf Moor back in 2010, made his first Premier League appearance when he replaced Jason Shackell in the first half of the 3-3 draw at Newcastle United on New Year’s Day.

The centre-back’s time on the pitch was cut short when landing awkwardly and the former Cork City youngster was forced off before the first 45 minutes had been completed.

Unfortunately that cameo at St James’ Park will be all the action Long sees for Burnley this term, with Dyche confirming the defender will miss the rest of season after rupturing his cruciate knee ligament.

“We didn’t think it was a good incident when we saw it,” the Burnley manager said. “It’s positive for Longy that he’s got somebody who’s just been through it, someone to talk him through it and he knows he’s got a support system in place that will get him through it.

“But obviously it is a blow to him. He got 20 minutes of Premier League football. It’s what football sometimes throws at you.”

However, the Clarets have been boosted by the return of Sam Vokes to action after a long lay-off and the striker made an instant impact when bagging the equaliser in Monday’s 1-1 draw with Tottenham Hotspur in the third round of the FA Cup.

Burnley will be hoping for more of the same as they continue their quest for Premier League survival against Queens Park Rangers in a crunch clash.

The Hoops are just two points ahead of their upcoming opponents and a win for Dyche’s men could lift themselves out of the relegation zone.

The Clarets are priced at 2.16 to pick up the home win, whilst QPR are 3.29 shots to record what would be their first away win of the season.