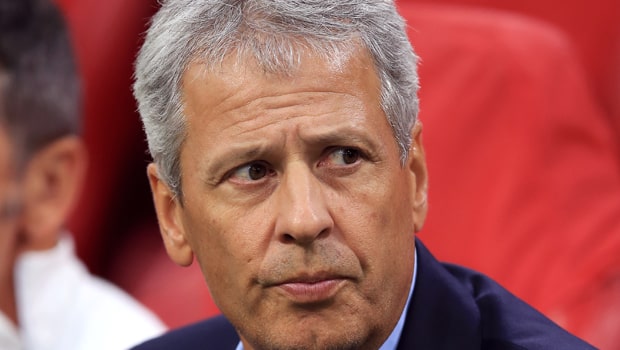 Borussia Dortmund coach Lucien Favre has hailed Jadon Sancho as a special talent and he feels the teenager can get even better.

Sancho has enjoyed a whirlwind rise to prominence this season, as he has established himself as a vital member of the Dortmund first team, scoring five goals and providing eight assists from 14 appearances across all competitions.

The 18-year-old’s form has also earned him international recognition with England and Favre feels that is an indication of just what a special talent he is.

“Of course he has a lot of potential. He’s only 18, and he’s already playing with the England national team,” Favre said.

“At the age of 18, that’s something special, you don’t see it very often.”

Favre believes there are no boundaries to what Sancho can go on to achieve, although he has urged the former Manchester City youngster, who has been heavily linked with a return to England or a move to Paris Saint-Germain, to continue working hard with Dortmund.

“Of course he can still improve a lot, that’s quite normal and he knows that. But he’s already very good,” the 60-year-old added.

“He knows that he still has to improve. He just has to keep working hard, keep working calmly, and needs to have a lot of fun.”

Sancho’s form has helped Dortmund move to the top of the Bundesliga table this season and they can consolidate that position by securing a victory over Wolfsburg at the Volkswagen Arena on Saturday.