Posted by Olumide Akinnifesi on June 5, 2020 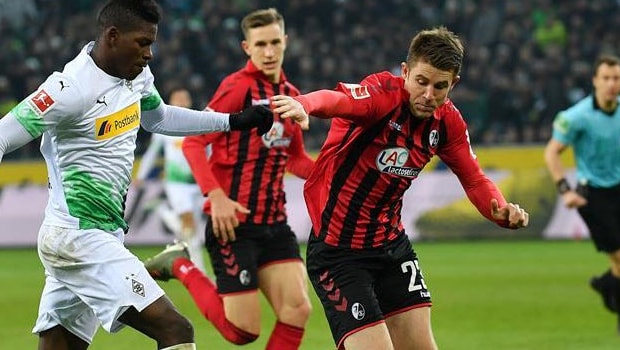 It’s another matchday in the Bundesliga as Borussia Monchengladbach will be aiming to mount pressure on RB Leipzig, who is placed third on the log table as they travel to Freiburg in Friday’s clash.

Freiburg playing host to Gladbach is still in search of their first win since the resumption of the league following two draws and two.losses last month.

Since the resumption of the Bundesliga, Freiburg has had to endure a complicated set of fixtures as Christain Streich’s side fell to a defeat against Bayern Leverkusen as Kai Havertz produced a last gasp winner in their previous game.

That result leaves Freiburg languishing eighth in the table with 38 points, but they could still grab the chance for the qualification of the 2020/2021 European slot. However, Streich men must improve on their performances if they are to challenge for a spot in the Europa League next season.

Taking a look at Freiburg’s home game records, they have not drawn at home since October 2019 in contrast to this the fame is likely to produce a winner. If Freiburg could get the vital three points at home, it will catapult them one point ahead of Wolfsburg and Hoffenheim before their weekend games.

Gladbach, on the other side, returned to winning ways after a disappointing goalless draw against Werder Bremen as they thrashed Union Berlin by four goals last Sunday.

That thumping win the previous week cushioned their position on the log as they remain on the fourth place over Bayern Leverkusen with the goal difference and 56 points gathered so far in 29 matches. With three-point in the bag this weekend they could leapfrog Leipzig into the third position

Today’s match is a must-win for both sides, but it is more evident Freiburg needs it the more. A win will satisfy and calm the fear of Christain Streich.

Gladbach likewise will hope to continue to build on their last win as get hope to push through to the champions league places.

Freiburg is sweating in the fitness of star defender Robin Koch as he was forced to walk off the pitch after their loss against Leverkusen.

Forward Janik Haberer has also had his fair share of injuries so far as he remains a doubt for the game, but Gian Luca Waldschmidt will be aiming to get back into the starting lineup after he came in from the bench last week.

Marco Rose will be without the dependable Denis Zakaria in midfield, Fabian Johnson, Veteran Raffael, Breel Embolo, and Tobias Strobl. With this absence, the partnership duo of Alexander Plea, Thuram, and Stindl continues upfront.