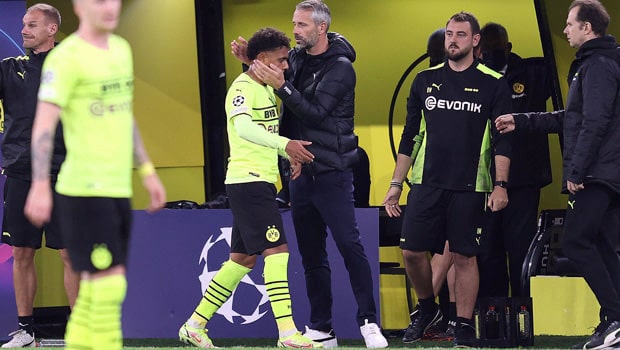 It may seem things doesn’t look good in the striking department in the Borussia Dortmund camp as Donyell Malen suffered a fresh injury blow.

According to reports, the team doctors confirmed Malen has picked up a Muscular injury in preseason ahead of preparations for the coming season.

This news has come as a huge concern for the club as the Dutch international was excellent for the club all through the previous season after joining the club from PSV to replace Jadon Sancho, who eventually departed for Premier League side Manchester United.

Taking a look at Malen’s performances last campaign, the forward contributed a total of five goals and six assists in the Bundesliga with a further four on the European stage (3 Champions League and 1 Europa League). With these stats, they seem fair for a striker, but we all know Malen is capable of doing better, especially during his days in the Eredivisie.

However, injuries during the course of the season has hampered his form as it has been a topsy- turvy for the Dutchman. It will be a huge disappointment if he fails to make it before the season kicks off at this moment (preseason) in time which is very vital for players to impress the manager and also look to claim a stake for a starting berth in the team.

The 2022/2023 season, which is just by the corner, will be Malen’s second full campaign with the Black and Yellow side. Expectations are high, however, that following his full season, there would have been adaptations, and he will perform at the very top level he once was before his arrival at the Westfaldion.

The good thing here is that Malen will link with the new forwards Karim Adeyemi and Sebastien Haller at the attacking line, and there are beliefs that this will also motivate him when he recovers to bring the spark in him and make the Dortmund attack a hit in the new season.

Dortmund continue their preseason preparations as Erdin Terzic look to put his squad in shape for the new season.