Dortmund Chiefs declare Sancho is Not for Sale

Posted by Olumide Akinnifesi on September 19, 2019 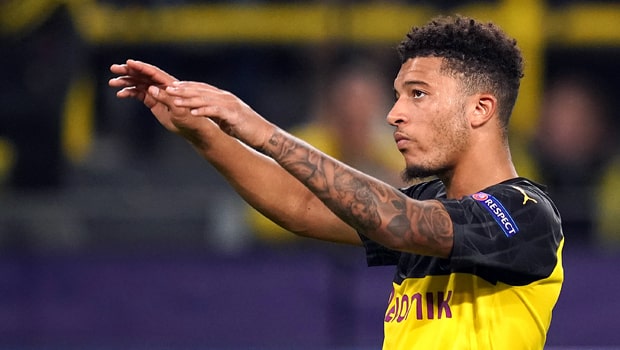 The talented young Three Lions star is staying put with the club and not looking to leave Dortmund anytime soon.

Jadon Sancho admits he does not know what the future holds for him, but he wants to stay and win titles with the club amid growing links from Manchester United.

Sancho has reportedly emerged as a top transfer target for United following previous speculation over a move to Old Trafford during the offseason. The 19-year old England international produced another impressive performance as Dortmund drew with Barcelona in the Champions League on Tuesday.

When quizzed about his future after the match, the teenager admits nothing is sure moving forward- aside from his desire to deliver for his club.
“I can’t tell the future. I just take it game by game. I just wanna give my 100 percent for Dortmund”.

” I really want to do well with Dortmund. Obviously, I want to win titles and give everything”. He said.

Sancho has established himself as one of Europe’s best talent after leaving the Premier League Champions Manchester City in 2017.

He scored 12 goals and created 14 assists as Dortmund finished runner up to Bayern Munich in the Bundesliga last season and already had two goals and four assists this season.

“It’s crazy. Everything has come so fast,” he said.

“But I have a great team. They kept me humbled. I just take it game by game and give 100 percent “.

Dortmund sporting director Micheal Zorc was asked about Sancho before the goalless draw against the La Liga Champions. Barcelona revealed though the Red Devils were interested in talking about their star, his club was quick to debunk their interest.
“We didn’t talk to them [United]. They were asking us for a meeting [during the off- season]. Sancho is not for sale. ” He said.

After scoring his first international goal last week, Sancho has been backed by his club teammate Achraf Hakimi to one day challenge for the Ballon d’Or.

“In a few years, if he continues this way, he will be a candidate.” For me, he is a spectacular player, though he still has a lot to learn and improve because he is very young, but he is excellent”.

Jadon Sancho is backed at 44.00 to finish as top scorer in the Bundesliga, while his teammate Paco Alcacer is priced at 7.75.