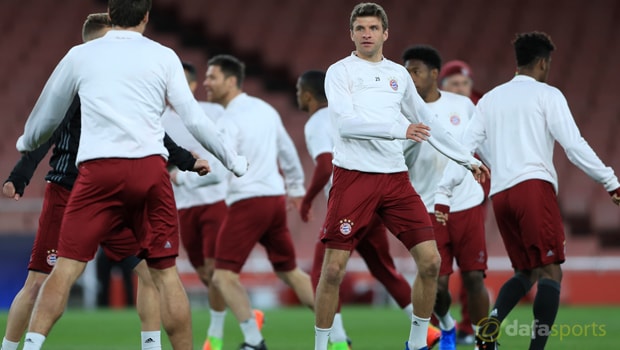 Thomas Muller has hinted he would consider leaving Bayern Munich in the future but, right now, he is happy with the German champions and is looking forward to a successful season.

Muller’s future at the Allianz Arena has been up for debate for over a year now after he struggled for form in the previous campaign, scoring just five goals from 29 Bundesliga appearances.

The Germany international has had to settle for slightly less playing time under manager Carlo Ancelotti, who has preferred to play Spanish attacking midfielder Thiago Alcantara behind Polish forward Robert Lewandowski.

At 27 years of age, the Weilheim in Oberbayern-born star still has plenty to offer and reports have resurfaced suggesting his time with the Bavarians is coming to an end.

Muller is yet to open his league account this term, putting more pressure on his shoulders, but despite revealing a move away could suit, he reaffirmed his commitment to the club.

“At the moment, I don’t think it’s going to happen because I am very happy here,” he told Kicker.

“However, I’m not saying that somewhere different in the world definitely wouldn’t be my thing either.

“If life takes you somewhere else then I would make myself at home there as well.

I would follow the same principle as here, enjoying as many good things as possible every day.”

Bayern, who lost 2-0 at Hoffenheim last time out, return to action on Saturday at home to Mainz and the hosts are 1.13 favourites to win, a draw is priced at 8.00 whilst the visitors are 19.00 outsiders.

Ancelotti’s men are still leading the market to win the Bundesliga this season at 1.15 with Borussia Dortmund second-favourites at 7.00.