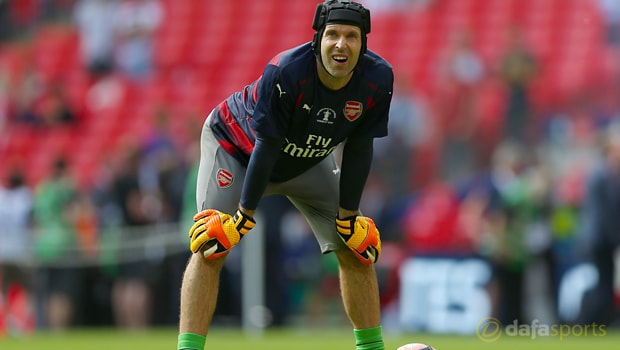 Goalkeeper Petr Cech says Arsenal will be taking the Europa League seriously as they prepare for their opening Group H clash against Cologne on Thursday night.

Arsenal endured a disappointing 2016/17 Premier League season and the club could only finish fifth in the table, missing out on Champions League qualification and having to settle for the Europa League.

The Gunners, who have never won the competition, have been drawn against Cologne, Crvena Zvezda and BATE Borisov in Group H and the English outfit are 1.30 favourites to top the pool.

Manager Arsene Wenger is set to rotate his starting 11 after Saturday’s 3-0 victory over Bournemouth with reports claiming Jack Wilshere will be making his first appearances for the club for 13 months.

Chile international Alexis Sanchez, who was denied a deadline-day switch to Manchester City, is expected to play to gain some much-needed match fitness whilst French striker Olivier Giroud and Theo Walcott may also start after seeing little playing time so far this season.

He said: “It’s one of the trophies that this club has not won since it became the Europa League, it could be one of the targets because it’s always nice to win a European trophy, regardless of which one it is.”

The Gunners, who are joint 8.00 favourites with Italian giants AC Milan to win the Europa League, are 1.30 to beat Cologne on Thursday, a draw is priced at 5.00 whilst the German visitors are 8.50 outsiders to cause an upset at the Emirates.