Thomas Muller lauds Bayern after the win against Hertha Berlin

Posted by Olumide Akinnifesi on January 21, 2020 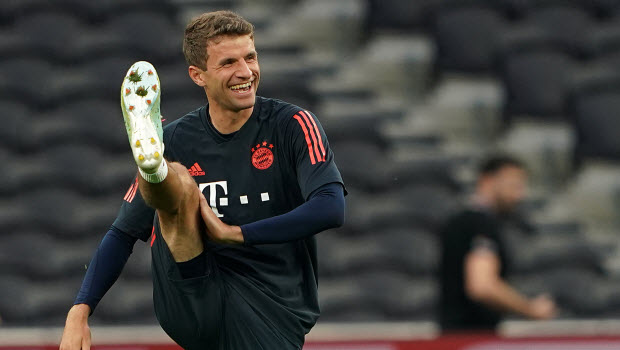 Goals from Thomas Muller, Robert Lewandowski, Thiago Alcantara, and Ivan Perisic sealed the victory. Muller was undoubtedly one of the standout performers after scoring a goal and providing an assist before being substituted after the 87th minute.

His experience was felt throughout the game, and he has been phenomenal under Hansi Flick compared to when Niko Kovac was in charge.
In a short interview after the match, the German international said Bayern were too casual in the first half but increased the third tempo during the second half to bring about a fantastic result.

From an angle point of view, it was glaring Bayern were a little sluggish in the first half. Although they had a more substantial proportion of possession, rarely tested the opposition Goalkeeper Rune Jarstein.

Bayern was more concerned with trying to block Berlin from playing on the counter, denying their pacy wingers [ Dodi Lukebakio and Javailo Dilrosun] the space needed to wreak some havoc. Marko Grujic was another dangerous player pulling strings from the middle of the park.

But Bayern stood firm to deny them any real chance.
Muller revealed they noticed the opposition was getting tired, opening up some spaces for them to capitalize. He [Muller] eventually broke the deadlock in the 60th minute after some slack defending by the Berlin defense.

Thomas Müller registered his 12th assist for the season for Perisic’s goal, the highest tally in the league so far. Joining him on the assist charts are Jadon Sancho (10) and Thorgan Hazard (9), respectively.

The performance has been one of the best for Thomas Muller under Hansi Flick this season, and he has shown why he needs to be in the starting lineup every week.
Bayern Munich will face Schalke 04 next.

The Bavarians are priced at 1.20 to defeat Schalke, while Schalke are backed at 14.21.