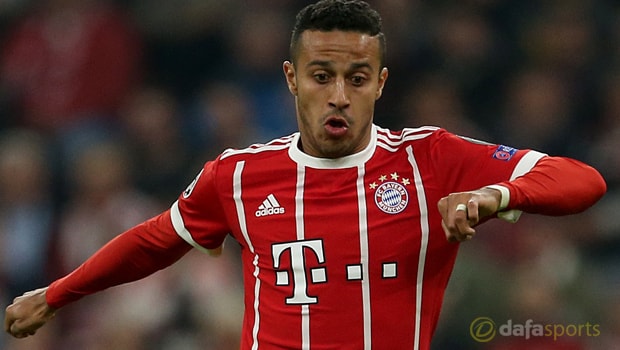 Bayern Munich midfielder Thiago Alcantara is convinced his side remain amongst the elite in the Champions League.

The Spaniard says Bayern are still amongst the small group of clubs that ‘everyone wants to beat’.

The Bundesliga champions travel to Istanbul for their last-16 second against Besiktas with a seemingly unassailable 5-0 lead from the first game in Munich three weeks ago.

It will require a sporting miracle of untold proportions to deny them a spot in the last-eight draw on Friday and Thiago is certain they’ll be amongst the biggest names in the hat.

“We are still one of the three, four teams that everyone wants to beat,” the 26-year-old Spain international told ESPN.

Bayern have come up short in the Champions League recently, they were ousted by eventual winners Real Madrid last season only after extra-time in the Bernabeu.

Thiago feels coach Jupp Heynckes is making the minor improvements that will see Bayern crowned kings of Europe for the first time since 2013.

“We have the same team but a mentality that’s a little bit better,” Thiago said.

“Maybe it’s because the people know the trainer from before, and they want exactly what the trainer wants. This fusion makes the team a little bit more aggressive.”

Carlo Ancelotti was fired after a 3-0 defeat to Paris Saint-Germain in the group stage in September. Under the returning Heynckes, who oversaw victory in 2013, they’ve lost only once in 27 games, winning 25 of them, and Thiago is feeling confident.

“We have this freedom to play, [while] keeping more safe behind. And we are conceding less goals than before. “The Bundesliga is important for sure, and the cup is as well,” Thiago said.

“But winning the Champions League is the point of being at a club like Bayern.”

Bayern are 5.50 to win the Champions League this season, with Real Madrid 5.00 to hoist the trophy for the third successive year.