Niko Kovac not bothered by speculation 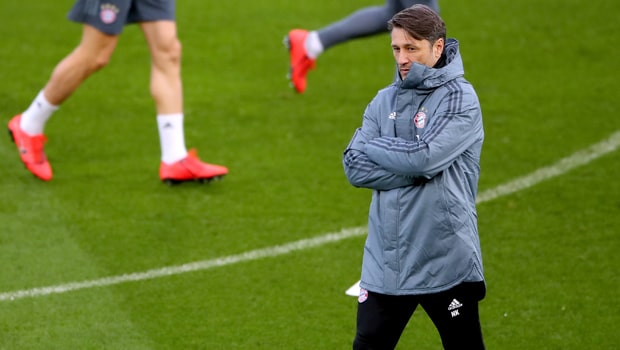 Bayern Munich boss Niko Kovac says he is not interested in speculation over his long-term future at the Allianz Arena.

Bayern could win the domestic double in the next two weeks and will do so if they first beat Eintracht Frankefurt at the weekend to secure the Bundesliga title. Then, a week later, they play RB Leipzig in the DFB-Pokal final.

Two more wins and Bayern will have the double, although a slip-up at the weekend could let in Borussia Dortmund and Kovac’s job might be in jeopardy if that happens.

Ajax head coach Erik ten Hag is among those whose name has been mentioned in connection with the job but Kovac says he is not interested in the speculation and is concentrating on the games to come.

“I have a contract that will run for another two years and I want to fulfil that, we have developed well and we only lost twice after the Dusseldorf game.”

Saturday’s game, which could see them seal the Bundesliga title in front of their own fans, will be a farewell for three players; Arjen Robben, Rafinha and Franck Ribery who are all leaving at the end of the season.

Kovac has not said whether they will be in his side but has confirmed that both James Rodriguez and Manuel Neuer will be missing because of injury.

“I will not tell you who’s playing, we want to get the fans excited, it’s a final, I’m pretty sure our team will feel the extra motivation. We hope the spark will jump us over the line,” he added.

Bayern Munich are priced at 1.53 to win the DFB-Pokal final, with Leipzig 5.25 and Kovac’s side are 1.02 to win the Bundesliga.