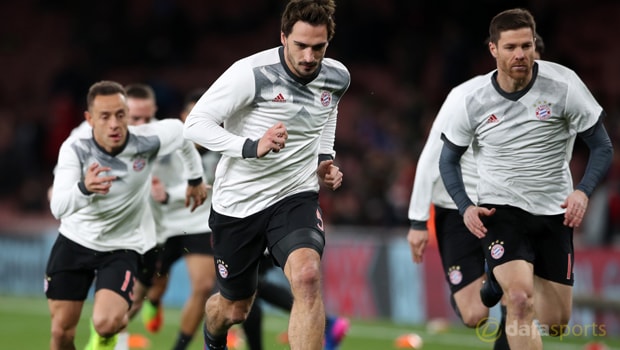 Mats Hummels believes Bayern Munich will head into the new season stronger than during the 2016-17 campaign.

The Bavarians have been busy in the transfer market, with Corentin Tolisso, Serge Gnabry, Sebastian Rudy and Niklas Sule already arriving, with more new signings planned.

Although the retirements of Philipp Lahm and Xabi Alonso, as well as the expected departure of Douglas Costa, have left holes within the playing staff, Carlo Ancelotti seems to be building an extremely exciting young squad.

Bayern won 9-1 at FSV Erlangen-Bruck on Sunday and their players are slowly coming together after their various international commitments over the summer.

Another Bundesliga title looks on the cards at 1.14 but it is European glory is what the German giants truly seek and they are currently 6.00 to win the Champions League.

Hummels enjoyed a decent first season at the Allianz Arena but believes the new arrivals at the club can help them take the next step and win their first continental title since 2013.

“I think the guys we did get will of course make us stronger,” he said.

“I have to admit I don’t know a lot about Tolisso. Sebastian Rudy and Niklas Sule I already know from the national team. Serge Gnabry as well.

“I don’t know exactly what is planned on the market, but I read in the news that something is moving or something will be moving. Until there are facts I also can’t say anything.

“We are definitely set up pretty good and if there was another player that could help us to reach another level then I am pretty sure the people in power will know that.”