Posted by Olumide Akinnifesi on September 12, 2019 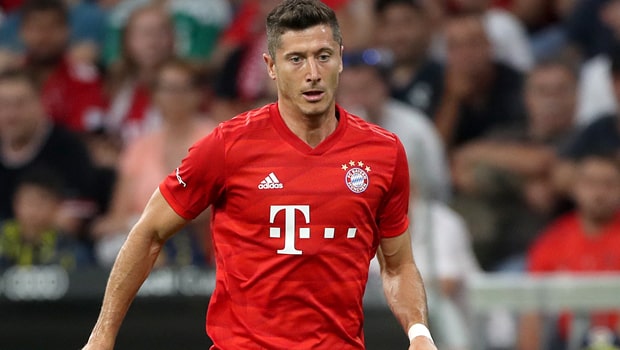 After signing a contract extension with the club, the Polish striker Robert Lewandowski has shown his desire on how he would like his Bayern Munich exit to play out.

Lewandowski has high hopes he has won the same level of respect with his former teammates Franck Henry Pierre Ribéry and Arjen Robben when his time comes to an end at the Allianz Arena.

Veteran players Robben and Ribéry moved on from Bayern Munich at the end of last summer; both players were given emotional farewell after 10 and 12 years respectively.

An electrifying display accomplished their final appearances at the club as both players got on the score sheet after an emphatic 5 -1 victory over Eintracht Frankfurt which eventually sealed the Bundesliga title.

Prolific striker Lewandowski, now in his sixth season with the club, could rival their longevity after signing a contract which will run through to 2023.

By then, the 31- year old might be ready to make his departure in a grand style.

“To have that goodbye is definitely a dream of mine”. He said.

“I’m not yet thinking of leaving, but to be honest, I almost had tears in my eyes when saying goodbye to them.”

“The experience was not only a wonderful moment for Ribéry and Robben, but also for us as teammates. To have such a farewell is something special”.

Lewandowski seems unhappy about Bayern during the end of last summer when he expressed his frustration at the club about lack of signings in the transfer market.

However, Ivan Perišić, Phillippe Coutinho, and Mickaël Cuisance all arrived late in the window to appease the Poland international.

He further added that those responsible had done an excellent job in the transfer market.

“We can be happy that we now have such strong additions to the team. The results can be seen in how we play our football, how we build our game and the movements we have in attack already look good. I benefit from that as well.”

Bayern played a 2-2 draw against Hertha BSC in their season opener but cruised past FC Schalke 04 and Mainz before the international break to occupy the second position on the log behind their Saturday opponents RB Leipzig.

Lewandowski is priced at 1.45 to win the topscorer in the Bundesliga this season while close rival, Timo Werner is available at 4.85.