Posted by Olumide Akinnifesi on September 16, 2019 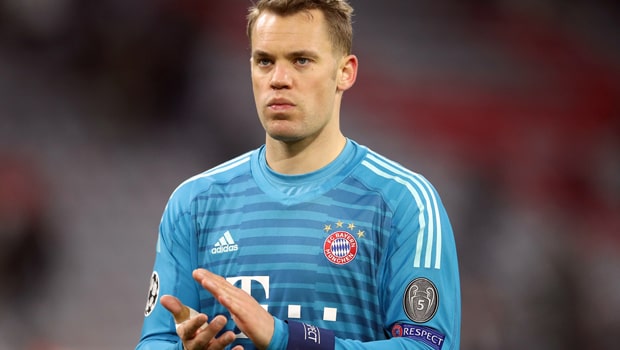 Manuel Neuer insists he will retire when his services are no longer needed.

The German no.1 shot-stopper has battled with several injury problems in recent years but remain adamant on his position and continues to captain both club and country.

The 33-year old played just four times during the 2017- ’18 season due to a foot injury, also suffering from a calf issue last season.

After Germany’s 4-2 loss to the Netherlands during the international fixture, more questions have been asked about his position in the squad, at a time when FC Bayern Munich are also reportedly eyeing FC Schalke 04 youngster Alexander Nübel as his potential long-term replacement at the Allianz Arena.

But Neuer, aiming to win his 90th International Cup and many more remains adamant when questioned about his potential Retirement – insisting he still has an important role to play.

” When you are no longer needed, and you feel it, it is difficult to get up and motivate yourself each day”. But when your experience is needed, and your players need you, it drives you on.”

“I have the feeling that I’m very much needed in this national team and that everyone is happy that I’m here. It’s clear that I have to show it in my performance.” He said.

Neuer remains no.1 for club and country, but he is under increasing pressure from Barcelona’s Goalkeeper Marc-André ter Stegen with the national side.

However, the World Cup winner, whose deal runs until 2021, insists he remains as ambitious as ever and isn’t intending on giving up either position just yet.

“My longevity is as a result of my love for this sport. It excites me a lot when I’m in the pitch training or playing. It’s a great fulfilment for me. I’m 33-years old, but when I’m on the pitch, I always feel I can improve on my Goalkeeping.”

“I’m still as annoyed with things that don’t work out as they did not or ten years ago, and I’m still happy at things that work out.”

“These are signs that mean something to me. Namely how ambitious I am still. I want to play as long as my body can do it. I’m having fun, and I’m needed.”