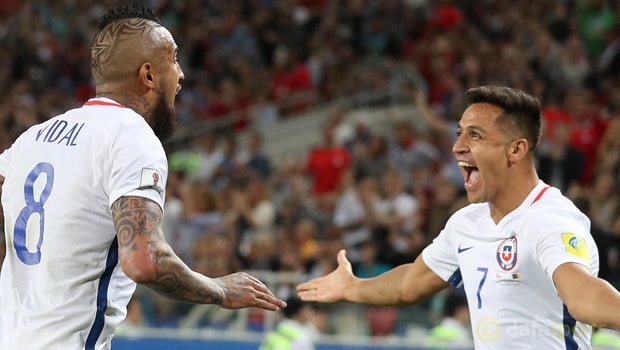 Bayern Munich midfielder Arturo Vidal has once again urged his club to sign international team-mate Alexis Sanchez this summer to make the Bavarians even stronger than they are.

Sanchez’s contract at Premier League outfit Arsenal only runs until the end of next season and, so far, negotiations over extending his stay at the Emirates have failed.

The Chile international has been the stand-out performer for the Gunners since arriving in England from Barcelona in 2014 and he has scored an impressive 53 league goals from 103 appearances.

His frustrations boiled over on numerous occasions last season and the 28-year-old has been tipped to leave the FA Cup holders for a top European side this summer.

Manchester City and reigning Premier League champions Chelsea have been linked with a move whilst Paris Saint-Germain, who lost their grip on the Ligue 1 title last term, are also showing an interest.

However, Vidal, for the second time, has now called for Bayern to make an offer for Sanchez and snap up his international team-mate before someone else does.

“We’ll see if Alexis is coming. I do not know yet,” he told German newspaper Bild.

“I know him very well. He is a spectacular player. And with him, we would surely improve.

“We already have a lot of top-level players. We are the best club in the world.”

Bayern romped to the Bundesliga title last season and they are 1.14 favourites to retain their crown in the next campaign, whilst Borussia Dortmund are a 6.50 chance.

European success has been harder to come by for the Bavarians – the last triumph coming in 2013 – and they are priced at 6.00 to win the Champions League, behind joint 5.50 favourites Real Madrid and Barcelona.