Posted by Olumide Akinnifesi on November 21, 2019 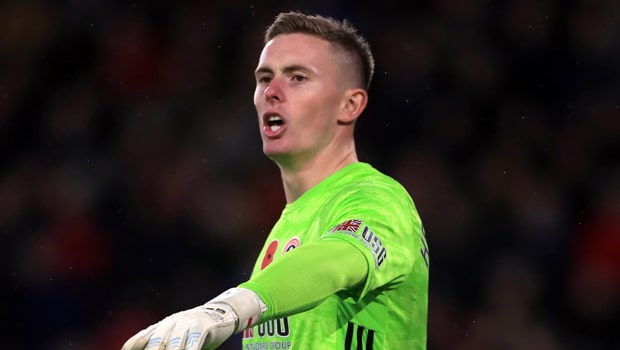 Manchester United Goalie Dean Henderson is being touted as a potential replacement for Manuel Neüer at Bayern despite signing a new contract extension in June before joining Sheffield United on loan.

According to reports, the Bavarians are looking at the English youngsters in the Premier League to improve their ranks, and Henderson has been scouted as a long-term successor to Neüer. The German side is also looking at Tottenham and Republic of Ireland forward Troy Parrot.

Bayern’s number one shot-stopper [Neüer] form has reduced drastically as age seems to tell on his career. Manchester United, on the other hand, do not need Henderson just yet as he won’t be able to dethrone De Gea and Sergio Romero. Therefore, Bayern
Munich will have to make their move before it dawns on United that the Spaniard will also need a replacement, and Henderson may not have the patience to displace De Gea.

Dean Henderson is an excellent Goalkeeper who has been in terrific form for Chris Wilder’s men this season. Though, It will be a big shoe to fill replacing Neüer.

Manuel Neüer is still regarded as one of the best shot-stoppers in the world, and he has redefined the role in modern football as a “sweeper-keeper”; always racing out of his box to repel opposition attacks.

A quick look at Henderson’s performance, this season for Sheffield United, shows he can man the sticks. The way they play the ball forward and rely on their defensive line and goalkeeper to keep opposition counters at bay is excellent, instead of parking the bus and being defensive till the end. Their compactness at the back is top-notch, and the “big teams” find it hard to break them down.

It remains to be seen if Bayern want the English youngster as they need to make their move soon.

Bayern resumes their quest in the Bundesliga as they face Fortuna Dusseldorf this weekend.

Bayern Munich are fancied at 1.20 to claim a victory over Dusseldorf, while Dusseldorf are available at 13.67 to cause an upset.