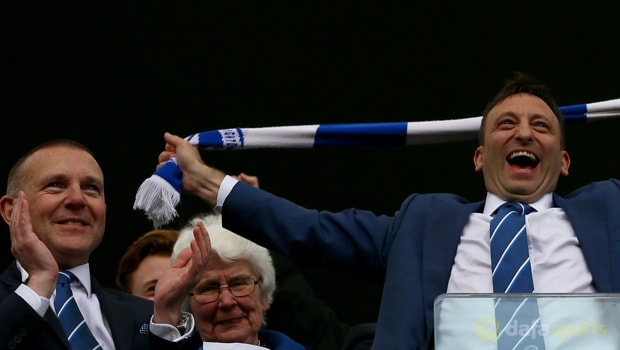 Brighton chief executive Paul Barber admits the club will stay loyal to the players who got them promoted to the Premier League, although they will also look to bolster their ranks in the transfer market.

The Seagulls secured their place in the top-flight for the first time in 34 years thanks to Monday’s 2-1 victory over Wigan at The Amex and one more win in their remaining three games would also wrap up the Championship title.

Brighton’s achievements this season have proved particularly impressive as they narrowly missed out on promotion to the Premier League 12 months ago, with manager Chris Hughton recovering from that disappointment to lead the team to success this term.

Barber believes staying loyal to the players and staff who just missed out on promotion in 2016 was important and intends to adopt the same policy during their debut season in England’s top division, although he insists they will not be afraid to delve into the transfer market if necessary.

“Having got this far and got into this division we absolutely want to stay there,” Barber told Sky Sports News HQ.

“We’ll back Chris as much as necessary to get the squad together for next season.

“Obviously there’s got to be a bit of balance with loyalty for the squad that have got us here, been so magnificent over not just this season but last as well, but obviously with one or two key reinforcements.”

Before Brighton can fully turn their attention to next season, they must first finish off their Championship campaign, starting with a trip to Carrow Road to take on Norwich on Friday.