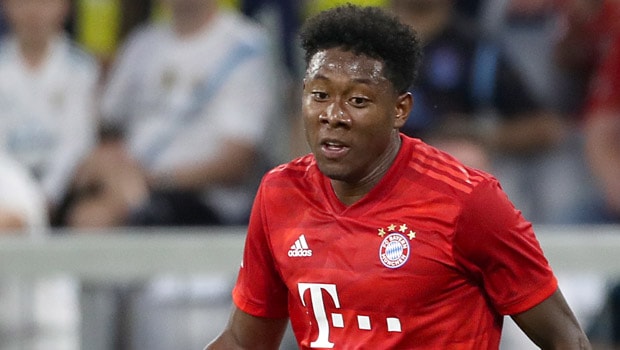 Bayern Munich’s Austrian defender David Alaba has become a subject of transfer rumor has reports link the left-back with a move to Spain.

The high-class defender who captains the Austrian national team has been at the Allianz Arena all his career and may leave the German Bundesliga Champions as he moves into the last year of his contract with them.

Spanish La Liga giants, Real Madrid and Barcelona, have both been on red hot alert to sign the Austrian National team captain as Bayern Munich may be forced to sell the high-class defender should contract extension talks fail to yield a positive result.

The reports say, though, that the El Clasico duo are not the world-class teams that are watching the situation closely as his former, coach Pep Guardiola, is said to be interested in bringing him to the Etihad stadium as well.

The Spaniard had coached Bayern Munich for three years from 2013 till 2016 winning the Bundesliga all through his stay in Germany but failing to clinch UEFA Champions League.

The 27-year-old is not surplus to requirement, but the presence of Alphonso Davies has given Bayern the opportunity of the possibility of letting him go should he decide to.

However, the player is said to be more interested in either the Catalunya side or the Los Blancos rather than joining the Premier League outfit albeit he would have little to no competition at the Etihad as the Citizens have only an injury-prone Benjamin Mendy as the only recognized left-back.

A young Sergio Reguilon when he returns from Sevilla where he has had a loan spell, a veteran Marcelo and Ferland Mendy are the players Alaba will have to contend with at the Santiago Bernabeau.

Meanwhile, the competition is quite stiff too at the Camp Nou where Jordi Alba and a not impressive Junior Firpo who joined last summer are the left-backs available to Quique Setien.